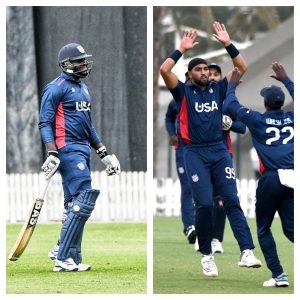 “Fate is like a strange, unpopular restaurant filled with odd little waiters who bring you things you never asked for and don’t always like.” – Lemony Snicket

All stars, but one, aligned for team USA as they were mugged off a historic win against UAE in their debut T20 International in the desert city of Dubai by a not-so-known guest to the area – RAIN!

On an average, in Dubai, it rains only 5 days in an entire calendar year. The USA cricket team and all its fans would be cursing their fate as rain chose to shower upon Dubai on the very same day when USA was about to make history by beating UAE in their first-ever Twenty20 International game.

USA lost their first wicket on just the 10th ball of the match, rain curtailed the game to 15 overs a side (just 13 for UAE post Duckworth-Lewis recalculations) and then rain washed out play after just 21 balls in the second innings – yet the ICC Academy in Dubai was dazzled by a 25-year-old Steven Taylor’s 72 off 39 balls, as USA sped to 152 for 7 in their allotted 15 overs. Playing his first International T20 innings, Taylor clubbed nine fours and three maximums to ensure the debutants knocked the right doors at the International level.

Saurabh Netravalkar called it wrong and UAE won the toss deciding to put USA into bat under cloudy skies hoping for some early inroads. And they weren’t disappointed as the wily left-arm spin of Sultan Ahmed cleaned up Xavier Marshall off just the 9th ball of the match with USA one down for 7 runs on the board. In came the man of the moment, Steven Taylor. First ball and “bang” – out of the park she goes! He just laid into a full ball, extended his arms, did not even complete the shot – but the impeccable timing on the shot sailed the ball over long-on for big six. This was just the beginning and Taylor did not look back. He kept hitting the boundaries at will and cleared the ground with ease. It seemed as if he was continuing from where he left the other day in North Carolina against Canada.

USA vice-captain and wicketkeeper batsman, Jaskaran Malhotra opened the batting and looked very comfortable while he was out there. While Taylor was going berserk at the other end, Jaskaran batted beautifully ensuring he rotates strike and does not allow UAE to plug runs at one end. On 28, Jaskaran slog swept Ashfaq Ahmed to deep midwicket where Sultan Ahmed took a blinder, leaping in the air to his wrong-side and plucked the ball out of thin air. Monank Patel came in next but did not last long as he was run-out for 9 runs in the 13th over. Four balls later, Steven Taylor was dismissed for a belligerent 72 and USA were 127 for the loss of 4 wickets with 11 balls to go. The stage was perfectly set, and Roy Silva did not disappoint. Known for his big-hitting ability, Silva took liking to UAE captain Naveed and took him to the cleaners with 3 consecutive sixes in the 14th over and propelled USA into the driver’s seat. Zahoor Khan pulled some momentum back for UAE with a fine 5-run and 3-wicket final over.

Rain came down again and UAE were set a revised target of 143 from 13 overs. UAE came out to bat and got off to the worst possible start. Jessy Singh, who made it to side with Ali Khan sitting out to treat his back spasms, made more than just an impact. Coming back from a reconstructive knee surgery to treat his ACL tear, after a good one year away from cricket – Jessy Singh looked fitter than ever before. He was running in swift, balanced and in rhythm. And his 2 wickets in the 2 overs he bowled are a testimony of the same. Just the 2nd ball of the UAE innings, Jessy Singh steaming in and Ashfaq popped the ball in the air to short-midwicket only to find a “flying Monank” – pulling off one of the finest catches seen. Jessy also cleaned up Rohan Mustafa in the 3rd over of the innings with a beautiful in-swinging delivery. Saurabh Netravalkar, opening the bowling with Jessy, was a little too short initially and Shaiman Anwar was severe on those deliveries. He did come back strong but the game was called off with only three balls into the 3rd over. Had 9 more balls been bowled, USA would have secured a win courtesy Duckworth-Lewis (DL) method. UAE had to be 51 for the loss of 2 wickets to be at par with the DL calculations at the end of the fifth over.

With rain playing a spoilsport, USA would have been a little frustrated. Taylor’s form, Jaskaran’s stability, Roy’s big-hitting, Jessy’s penetration and a plethora of talented players in the mix – all call for a historic series win for USA as they take field tomorrow (March 16, 2019) for the series finale.