Under the captaincy of Darren Sammy, West Indies registered a thrilling win over England in the finals of 2016 edition played at Eden Gardens, Kolkata that took place on 3rd April. They are currently the defending Champions of T20 World Cup.

The tournament started on 8th March with qualifying round matches while Super 10 round matches began from 16th March. West Indies were clubbed with England, South Africa, Sri Lanka and Afghanistan in Group 1. In the Group stage, they finished at the top with 6 points defeating England, South Africa and Sri Lanka. They were stunned by Afghanistan in the final group game.

It was an amazing performance by West Indies who stunned the hosts India by 8 wickets in the 2nd Semi-finals. They held their nerves in crunch moments and won their 2nd World T20 title after they won in 2012.

The experienced Marlon Samuel was the leading runs scorer for West Indies in the 2016 edition. He scored 181 runs from 6 matches (6 innings) with 1 half-century. His best knock came during the finals against England played at Eden Gardens, Kolkata.

He also played an important knock in their 3rd Group match against South Africa played at VCA Stadium, Nagpur on a tough pitch. South Africa posted 122 for 8 in 20 overs. Samuels contributed 43 off 44 balls and led West Indies to a thrilling 3 wicket win, was awarded the man of the match.

Marlon Samuels played a match-winning knock of 85* in the finals against England. Thanks to good bowling, West Indies restricted England to 155 for 9 in 20 overs. Chasing 156 runs to win, West Indies were struggling at 11 for 3. Samuels came to the rescue and played with positive intent putting pressure on England bowlers. He and Bravo added 75 runs for the 4th wicket which steadied the West Indies innings. West Indies were reduced to 107 for 6. Samuels reached his fifty off 47 balls and showed his intent after completing his half-century.

Samuels showed the way and remained not out on 85 off 66 balls which helped West Indies register 4 wicket win. For his superb knock, he was awarded the man of the match. 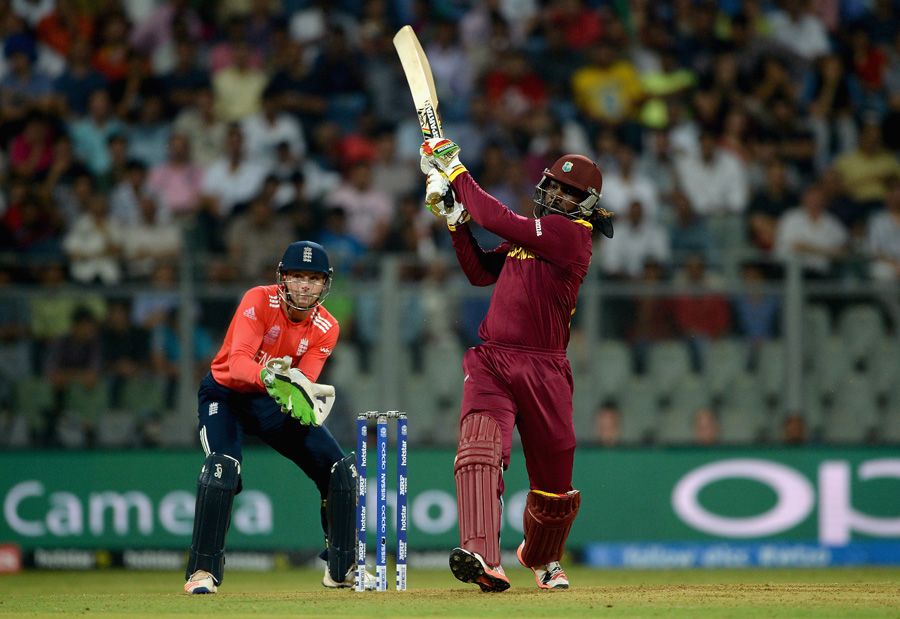 Chris Gayle did not have a great tournament with the bat for West Indies. During the opening Group 1 match against England played at Wankhede Stadium, Mumbai on 16th March, the hard-hitting batsman made the life tough for English bowlers.

West Indies captain Darren Sammy won the toss and decided to field first. They restricted England to 182 for 6 on a placid batting pitch. Chasing 183 runs to win, Gayle looked cautious at the start before smashing the English bowlers to all over the park. He reached his fifty off just 27 balls and never looked back smashing century off 47 balls. His knock helped West Indies chase down the target with 11 balls to spare. In his 100, Gayle hit 5 fours and 11 massive hits which created an impact on the match. 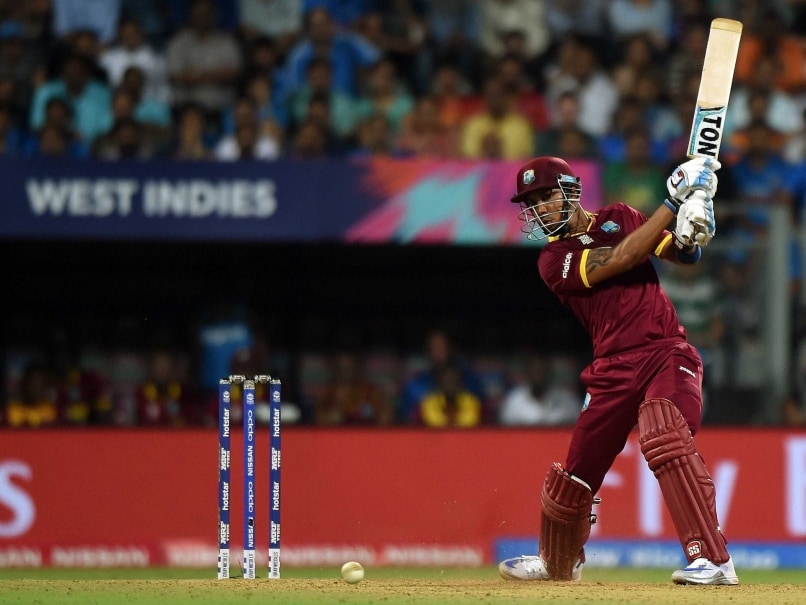 Lendl Simmons featured in just 2 matches (2 innings) with the best score of 82*.  In the 2nd semi-finals played at Wankhede Stadium, Mumbai on 31st March, India posted 192 for 2 in 20 overs.

Chasing 193 runs to win, West Indies lost 2 early wickets of Chris Gayle and Marlon Samuels. Simmons was given a reprieve as he was caught by a no-ball. He took on the chance and took on the Indian bowlers. After reaching his fifty off 35 balls, Simmons was given another chance as Hardik Pandya overstepped. He never looked back and remained not out on 82 off 51 balls with 7 fours and 5 sixes which helped West Indies stun India by 8 wickets with 2 balls to spare.

For his match-winning knock, Simmons was awarded the man of the match. In the finals, Simmons was dismissed off the very first ball.

The right arm leg spinner was the leading wicket-taker for West Indies in the 2016 edition. He played in 6 matches ( 6 innings) and took a total of 9 wickets with an economy of 5.39 runs per over. In every match, Badree bowled with control and never allowed the opposition to score runs easily.

His best figures in the tournament were 3 for 12 against Sri Lanka at M Chinnaswamy Stadium, Bangalore on 20th March. In the semi-finals against India, where other bowlers were being smashed all over the park, Samuel was superb with 1 for 26 in 4 overs.

He usually bowled in the first six overs or whenever the captain needed a wicket. His performances helped West Indies restrict oppositions to manageable totals. 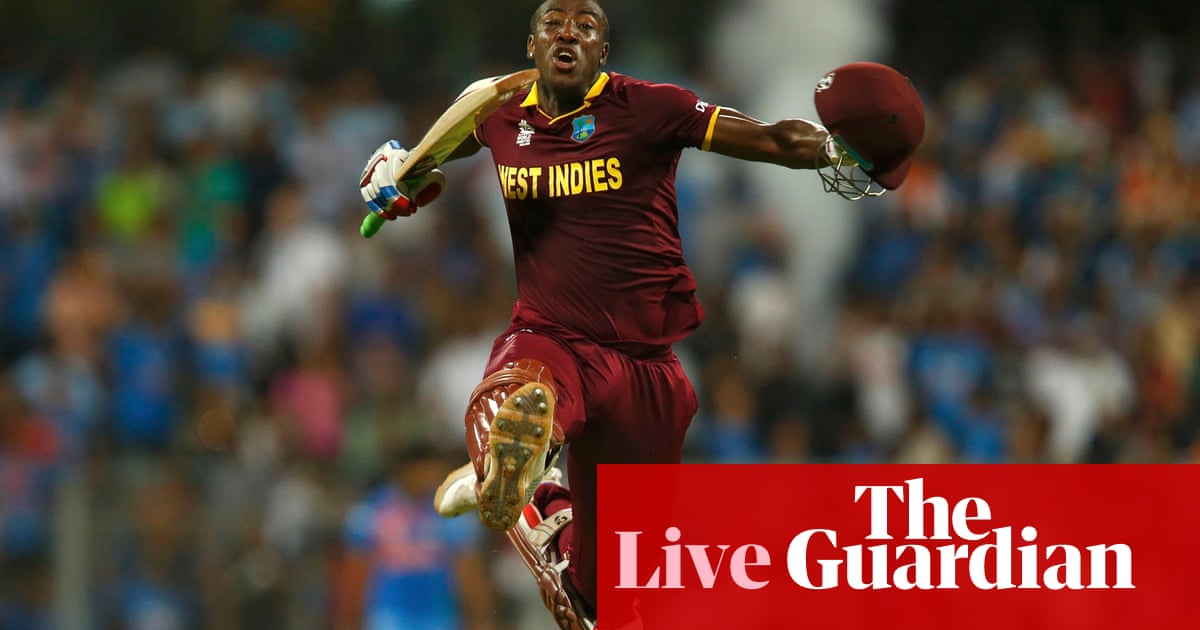 Andre Russell contributed to the team’s success with both bat and ball. He took 9 wickets from 6 matches (6 innings) with a high economy of 7.87 runs per over. His best figures in the tournament were 2 for 23 against Afghanistan.

He took 2 wickets for 36 against England in the opening Group 1 match, 1 for 34 against Sri Lanka, 2 for 28 against South Africa. In the semi-finals against India, Russell went for 47 picking 1 wicket. He was brilliant with the ball in finals giving away just 21 runs and taking 1 wicket.

Special note: Carlos Braithwaite did not have a great tournament till the finals. With 19 runs required off 6 balls, he smashed Ben Stokes for four successive sixes to register a remarkable win by 4 wickets. He remained not out on 34 off just 10 balls with 1 four and 4 sixes.