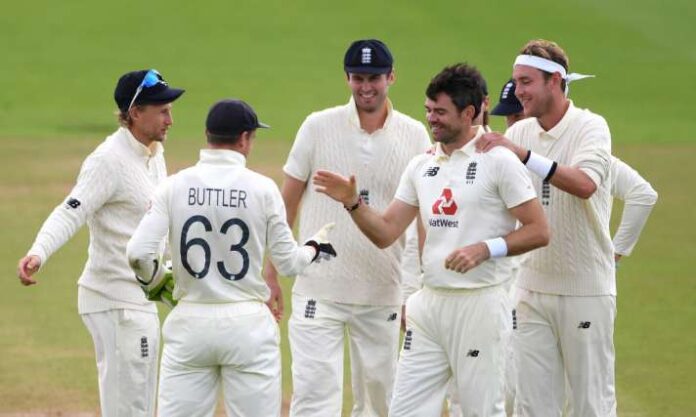 The Third Test between England and Pakistan ended in a draw, much like the previous one after rain allowed only limited play on the fourth and fifth day of the Test match. With Pakistan playing for avoiding a loss, the fifth day was set for an interesting finish but wasn’t meant to be. The subsequent draw meant that the hosts pocketed the series 1-0, their third straight bilateral Test series win in 2020.

In another much awaited moment, James Anderson finally picked up his record 600th wicket. After having dropped 4 catches off his previous 6 overs, Anderson finally had a chance to hold up the match ball breathing a sigh of relief. He become only the first fast bowler and fourth overall to reach the milestone. Moreover, his splendid spell in the Test match laid all retirement rumours to rest. The speedster remained threatening with the bat and attacked the batsmen with both swing and pace.

James Anderson in his debut season in 2003 impressed everyone with a neat action and a sound discipline. Today, 17 years and more than two and a half thousand overs later, Anderson with the same joy, excitement and energy of a 21 year bowled his heart out. His subtle yet joyous celebration after the milestone wicket also displayed the maturity and patience the right hand seamer gained over the years. His journey has had its own highs and lows but the legendary England speedster has got through them all. With all the skill set, wicket-taking ability and an unfathomable physical fitness, James Anderson is inarguably the ‘Best Fast Bowler in Tests ever.’

Jimmy, as he is widely known, has the ability to swing the ball in both ways. While he has enjoyed most of his success at home in swinging conditions, his performances down under and in the Indian subcontinent are no less-worthy of praise. Everytime the English team has stepped into trouble on the field, Anderson has got them out most times. The terror Anderson and his compatriot Stuart Broad have created together within the minds of numerous batsmen remains unmatched. Now, with Anderson already clearing air over retirement, both on and off the field, one would be keen to see if he catches up with Kumble’s wicket-tally of 619.

England vs Pakistan: Rain has the final say

Other than Anderson miraculous feat on the fifth day, the Test remained eventful overall. English captain, Joe Root won the toss choosing to bat first on a dry wicket. English innings, largely led by Zak Crawley’s marathon 267 and Jos Buttler’s steady and impressive 152 reached a mammoth 583/8 before declaration. Reduced 127/4, Crawley and the England wicket-keeper combined well to both attack the loose balls and defend the good ones. The duo tormented the Pakistani bowlers to all parts stitching up a 300+ run stand for the fifth wicket. Moreover, they accumulated runs at a brisk pace in order to allow themselves enough time considering the rain predictions on the last two days.

The pressure of a big score was largely evident on the Pakistan batsmen in the second innings. Led by the veteran Anderson’s stupendous bowling, the visitors were down to 24/3 at the end of Day 2. The flurry of wickets continued the next morning as Asad Shafiq and Fawad Alam followed suit. Pakistan stranded at 75/5. It was only upto the captain, Azhar Ali and the keeper Mohammad Rizwan to take Pakistan to a respectable total. The former was still in his bid to find form while the young keeper came in on the back of some impressive batting in the last Test. Together, the two did manage to get through the crucial phases and score runs as and when possible. Infact, Azhar Ali went on to score his hundred carrying his bat after Rizwan’s dismissal. Though his effort could not avoid the obvious follow-on, it killed crucial time nonetheless.

In the second innings spread across two days, rain reserved its final say. Storm Francis, which was expected to hit Manchester on Tuesday did not fail to mark its presence. The extended extensions though came in handy as England managed to bowl 83 overs in the allotted time. However, the bowlers only managed to pick up 4 wickets, courtesy Abid Ali’s stern resistance and Babar Azam’s valiant stroke making. The draw also meant that Pakistan and England shared 20 points each in the ICC World Test Championship table.

English Cricket will continue in the bio-secured environment. The domestic Test, T20 as well as ODI tournaments are all slated to start this month. Increasing pandemic scare and the revised dates of T20 leagues around the world are sure to put international action on hold though.