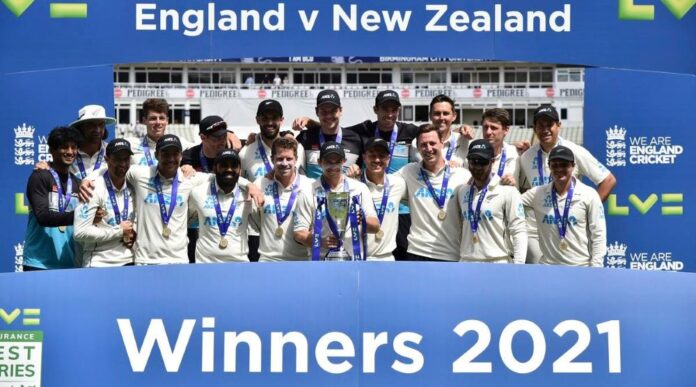 New Zealand’s tour to England ended on a successful note as they wrapped up the 2-Test series with a win in the decider on Sunday. The eventual ease with which the Kiwis made it happen would certainly raise their hopes going into the World Test Championship (WTC) Finals next week. The series had a lot of positives to take for the visitors while the hosts struggled to make ends meet even in home conditions with their reduced setup. The two sets certainly hold importance going deep into the English summer.

Rain robs First Test of a Result; Conway shines on a dream debut

The first Test at Lords brought a bright smile on the face of the Kiwis as the ball refused to swing for the Englishmen in the first innings. Both Anderson and Broad had it difficult to create troubles for the batters as New Zealand cruised their way through on Day 1. At the forefront of the Kiwi attack, amidst all the veteran names of Latham, Williamson, and Taylor, was the debutant, Devon Conway. After conquering the white-ball circuit with a few blistering knocks early this year, Conway announced his arrival to Test cricket in style. He went on to become the first overseas debutant since Ganguly (1996) to score a hundred at Lords and remained unbeaten with a hunger for more. The pinnacle of his innings came on Day 2 as Conway made it bigger. Only the seventh player to reach a double century on debut, Conway made his intentions to stay clear on the biggest possible stage.

England bowlers, however, did enough on Day 2 to dent the New Zealand ship with a few holes as they were dismissed for 378. The ‘man in news’ Ollie Robinson was the pick of the bowlers for England picking up 4, while Mark Wood followed a close second with 3. The response from England had a mix of fortune having lost their first two wickets quickly. The skipper Joe Root and opener Rory Burns stitched a crucial half-century stand to take the team past 100, but the middle order failed to add any significant contribution. England was soon reduced to 140/6 with a follow-on threat largely looming around. It was then that Robinson again came to England’s rescue and added a crucial 63 with Burns. Incidentally, Burns also went on to carry on till the last wicket bringing up a well-compiled and a much-needed hundred, England score 275 all out. Tim Southee returned with a 6-for for his tremendous efforts to restrict the hosts.

The lead of 103 always meant that England was to play a catchup game all along. Although they were helped by the rain gods who took away the play on Day 3. New Zealand with only a little time to play with began their second innings briskly but lost the plot in an effort to score runs. They declared after the first session on Day 5, setting up England a target of 278 to get in a minimum of 70 overs. The prospect was much reminiscent of India’s at Gabba down under last year, but England had other ideas. In an attempt to lay a strong foundation, they ate up too much time and took it too late to bring in the counterattack. The bowling from NZ did not allow them to free their arms either. The all-around effort from either team took the game to a draw in the final session. The approach was criticized and talked about by many across the globe, but as it stood the series was to go into the deciding Second Test at Edgbaston.

England falter yet again; Lose the Test and series inside 4 days

England had managed to sneak out following a rain interference in the first Test but they had the same was not meant to be this time around. England began well with the bat and rallied through the first session without much trouble. The hiccups though began in the second session and continued through to the third. The middle-order batters found it difficult to face Boutlt-Henry and Patel giving away wickets cheaply. The only two batters to do well were Rory Burns and Dan Lawrence, scoring 81 each. England ended the first day at 258/7 with Lawrence and Mark Wood at the crease. The following morning, Lawrence only managed to add 45 with the tail as England were bowled out for 303.

It was important for New Zealand to get a crucial lead in the first innings. The absence of Williamson was certain to hurt but with an able replacement in Will Young, they had the belief to run through. And once again it was the miracle man, Conway at the fore with a fluent 80 run knock. Young also added a crucial 82 while the veteran Taylor made his presence felt with a much-needed 80. England ended Day 2 with 229/3, Ross Taylor and Henry Nicholls at the crease. The Kiwis batters had the Englishmen by their jaws as they went on to secure a first-innings lead mid-way through Day 3. A blast of wickets from the England bowlers saw NZ lose the plot, but not before they piled up an 85-run lead.

Nasser Hussain had a handful to say against England’s batting collapse:

💬 "They are acting like 'everyone else that has played in the history of the game are wrong, and we are right'." 💬@NasserCricket not happy after watching England suffer another batting collapse on day three of the second Test against New Zealand.#ENGvNZ 🏴󠁧󠁢󠁥󠁮󠁧󠁿🇳🇿

It was an uphill task to set up a competitive total against a consistent and aggressive Kiwis bowling unit. England needed a minimum of 200 to defend on the Edgbaston wicket, which still had something for both the batters and the bowlers. Come the second innings, the world was up for a tough fight from the hosts, but that wasn’t meant to be. The England batters fell off like king-pins one after the other. Each of the New Zealand bowlers returned with at least a couple of wickets to his name. Mark Wood (29) and Ollie Pope (23) remained to only two to cross the 20-run mark, as England were bundled up for a mere 122. A 38-run target was never going to be enough for any team to defend. New Zealand went on to chase down the total with 8 wickets to spare winning the series and continuing their dominance against England. The series also set the perfect tone for them going into their World Test Championships Final against India.

New Zealand all in readiness for the WTC Finals:

Arguably one of the most sought-after matches Test cricket has ever seen, India-New Zealand at Southampton starting 18th of June is a guaranteed spectacle. The speculations surrounding Williamson and Watling’s availability for the same are still uncertain but either team is sure to come in prepared regardless. Southampton will also witness some crowd for the WTC Finals to make it much more interesting.