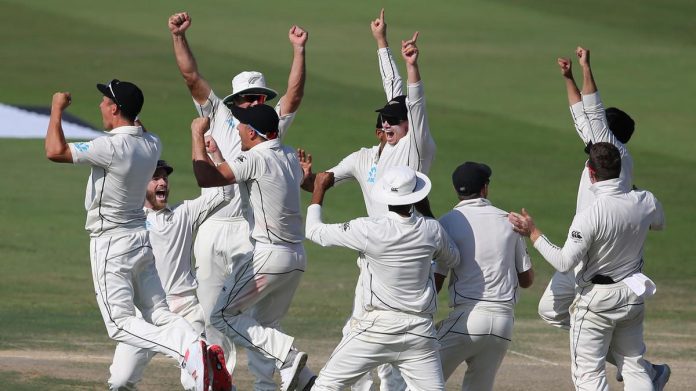 The number 2 ranked Test side in the World, New Zealand leveled the series with an innings and 65 runs win over Sri Lanka played at P Sara Oval, Colombo on Monday.

After the first session was completely washed out on the 1st day, Sri Lankan captain Dimuth Karunaratne won the toss and decided to bat first. Lahiru Thirimanne and Kusal Mendis were dismissed on a rain-curtailed 1st day with the score at 85 for 2. Dimuth Karunaratne looked solid and remained not out on 49.

On the 2nd day, Dimuth Karunaratne reached his fifty. It was another rain-curtailed day as Sri Lanka ended 2nd day at 144 for 6 with Dhanajaya de Silva on 32. Dhananjaya de Silva showed his class on the 3rd day and scored 109. Sri Lanka was bowled out for 249. In reply, New Zealand early wickets of Jeet Raval, Kane Williamson and Ross Taylor cheaply. Tom Latham played a gem of innings and ended the 3rd day on 196 for 4.

Latham and Watling played with positive intent adding 143 runs for the 5th wicket. Tom was dismissed for a brilliant 154. Colin de Grandhomme came to the crease and remained not out on 83 in quick time. New Zealand ended the 4th day at the score of 382 for 5. Tim Southee scored a quickfire 24 off 10 balls and helped Kiwis declare their innings on 431 for 6. BJ Watling remained not out on 105.

It was a dreadful start as Lahiru Thirimanne was dismissed in the 1st over. Boult dismissed Kusal Perera soon. Colin de Grandhomme took the wicket of Mathews to put Sri Lanka under pressure at 11 for 3. The centurion of first innings, Dhanajaya de Silva was dismissed cheaply too for 1. Sri Lanka were reduced to 33 for 5 at lunch.

Dickwella and Karunaratne added 41 runs for the 6th wicket before Tim Southee got the wicket of Sri Lankan captain. Dickwella played with caution and scored an important 50 before getting out. New Zealand bowled out Sri Lanka for 122 in 2nd innings to help Kiwis register a resounding win despite a lot of the time was curtailed due to rain. Trent Boult, Ajaz Patel, Tim Southee, Somerville took 2 wickets each. Colin de Grandhomme took 1 wicket.

With this win, New Zealand earned 60 points in the ICC Test Championship. The Kiwis made a strong comeback to level the series after losing 1st Test match at Galle.