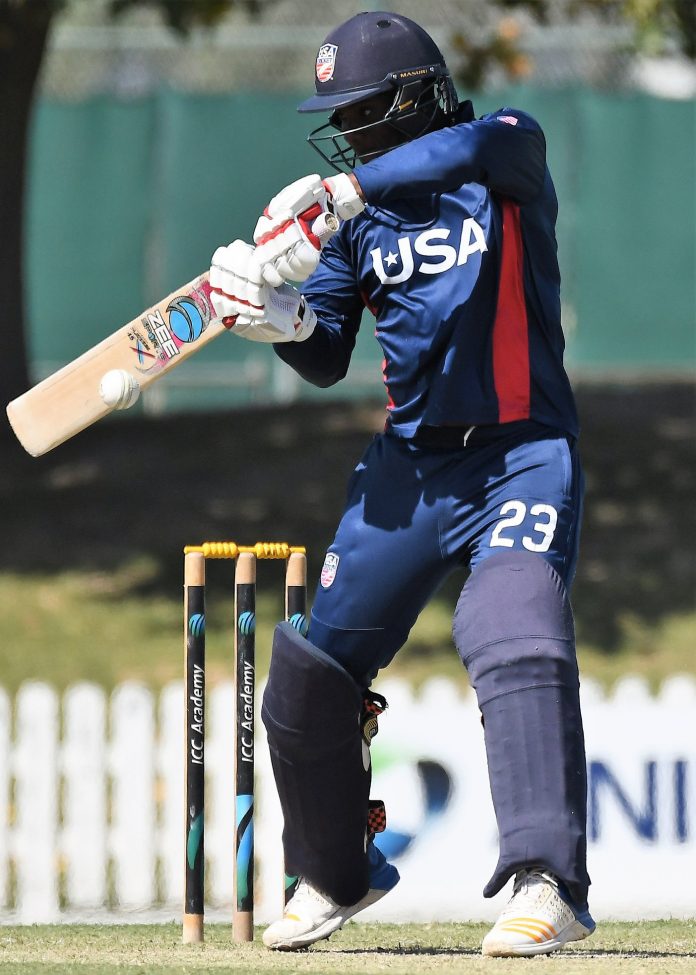 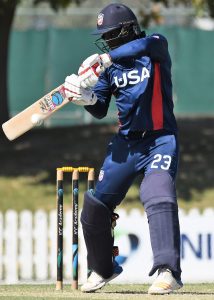 USA opening batsman Xavier Marshall cracked a blazing 170 off 147 balls to help USA beat UAE Developmental XI by 32-runs and register their fourth consecutive win in Dubai. The UAE developmental XI did not go down without a fight with their number 3, Amjad Khan, taking the fight to the US bowlers scoring a solid 128 off 94 balls. However, he ran out of partners as none of the other UAE batsmen stood ground to support Amjad’s heroics. In the end, USA won quite comfortably bowling out UAE XI for 270 in 46.4 overs.

The game began with usual rituals as Saurabh lost yet another toss and USA were put into bat, once again. Monank Patel and Xavier Marshall opened the innings once again and Monank looked much at ease after his 47-ball 42 in the previous game as he stroked his way to 19 off 14 balls with four crisp boundaries. However, the fun did not last long for Patel as he nicked a Saif Noor delivery to the keeper Abdul Shakoor. Steven Taylor (13 off 7 balls) came in next, and just like Patel got going with three boundaries before edging Saif Noor to the keeper. Aaron Jones coming in at 4, left the field early as he was bowled by the slow left-arm orthodox of Rahul Bhatia with USA at 61 for the loss of 3 wickets at the 10-over mark.

USA vice-captain came together with Xavier Marshall and they strung together a solid 102-run stand for the fourth wicket with Marshall taking the role of an aggressor while Malhotra played smart and held fort at one end. Marshall started cautiously against the new ball but then broke free, especially against spinners, to bring up his fifty off 44 balls in the 16th over. The innings then went through at a slow pace with a determined Marshall at one end and a compact Malhotra at the other end and USA reached 161 at end of the 31st over. With seven wickets in hand and 2 set batsman at the crease, the onus was upon the batsman to push the accelerator now and that brought about the downfall for Malhotra as he was dismissed by the left-arm spin of Aryan Lakra by Kai Smilth.

Hayden Walsh Jr. walked out next and joined Marshall who brought up his first century for USA off 113 balls in the 36th over. Marshall and Walsh continued milking singles as USA reached 203-4 at the end of the 40th over. The platform as well set and so was Xavier Marshall. The launch pad was ready and boy how well did Marshall launch from there on to sky-rocket his innings strike-rate from 87.7 to 115.6 in less than 7 overs. He scored 63 runs in the 25 balls he faced post the 40th over. The all-time highest score for a USA batsman (197) was in danger and well within Marshall’s sight before he fell trying to hit another six to add to his tally of 14 fours and 10 sixes. Saif Noor, the most successful and the most economical UAE XI bowler, dismissed Marshall to get his five-for. Captain Netravalkar was the ninth USA wicket to fall and Saif cleaned up Emlore Hutchinson to bag very impressive figures of 6 for 42 as USA folded for 302, with nine more balls left unused.

The target was steep and USA were surely favorites – until Amjad Khan produced a fierce 128 off just 94 balls. What haunted UAE XI and deserted them off a win was the absence of good partnerships. There was only one noticeable – the 33-ball 64 run partnership between Amjad and Arslan Javed for the 7th wicket – a little too late leaving Amjad to do a little too much with the tail. For the USA, captain Saurabh Netravalkar was brilliant with the new ball as he bowled an inspiring six-over spell with the new ball with one maiden and giving only 18 runs. He was well supported by the veteran Elmore Hutchinson who ended with economical figures of 5 overs 1 maiden 14 runs. Steven Taylor was the pick off the spin bowlers as he grabbed 2 wickets at an impressive economy rate of 4.77

The other spinners, Hayden Walsh and Nosthush Kenjige, bore the brunt of Amjad’s belligerence and were expensive on the day but did pick 2 wickets apiece as UAE XI had to go after them to chase the mammoth 302 that they were chasing,

USA have made it four wins in four games and are on a roll. They have a rest day and then play the UAE Developmental XI again on the 24th of March, 2019. It will be exciting to see the 20-year old Karima Gore – recently drafted into the USA squad – to take the field as there are still concerns about Ali Khan’s match fitness. Don’t be surprised if you see a different look to the USA side on Sunday – with all eyes on the debutant, Karima Gore, and the Ohio Express, Ali Khan.