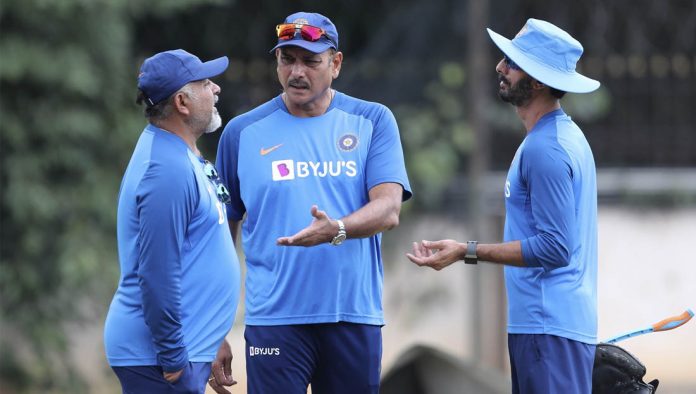 What the Indian cricket team achieved down under this month was phenomenal. To be down and out in the first Test, and to construct a comeback of that quality from there took a great heart, effort, and more importantly, the intent. The passion and the dedication with which each and every player took the field was admirable and also contagious. The never-say-die attitude, the fighting spirit, and the belief within oneself and the team remained key to the miracle to unfold. Though it was the players to the naked eye that performed, the Indian cricket team had many heroes outside the field of play as well. The Indian support staff, that stood behind the team like a solid rock helping everyone improve and play to their best potential, was instrumental in India creating history in Australia.

Lead by head coach, Ravi Shastri, the Indian support team consisting of Bowling Coach Ravi Shastri, Batting Coach Vikram Rathour, Fielding Coach R Sridhar, Physio Nitin Patel, Analyst Hari Prasad, the Luke Woodhouse-led Strength and Conditioning Team, Raghu and the throwdown specialists team, Team Manager, Logistic Managers, Media Consultants and everyone else associated with the crew are all worthy of as much praise as the XI on the field. Each and every one of them has put the hard yards to get the best out of the Indian team but have often escaped the limelight. A team is driven by the atmosphere, on the team balance, working environment, and especially trust between one another. The Indian support staff has primarily maintained just that for a few years now.

Even in the press conferences, the Indian support staff has often stood behind the team, even during its bad performances. They have taken the blow on their head and at times have also gone on to defend the most unusual strategies. The staff has never shied away from experimenting either. The increasing depth in India’s bowling attack too can be credited to the support system. The kind of structure they have built, along with the captains and the BCCI has seen multiple players get their dues, a few thereby making it to the highest level.

Along with skipper Virat Kohli and vice-captain Ajinkya Rahane, Ravi Shastri created the kind of environment in the dressing room that strived to succeed in putting their best foot forward, both in the fitness as well as the skills aspect. The experienced is well-heard, the young are guided through, and the ones struggling are given enough time and chances to get back. The fact that every single Indian player to have been a part of the squad in the last three years has publicly spoken about the freedom and the opportunities showered to him, is proof of India’s winning formula in recent years. The number of match-winners that emerged out of the Indian tour to Australia 2020-21 remains the highlight of the tour.

Vikram Rathour, India’s batting coach in a recent interview on Ashwin’s Youtube channel talked about how he, along with analyst Hari Prasad came up with presentations to simulate the match conditions along with its scalable real-life implementation to train, especially against the legendary Australian bowling attack. He also talked about how the Indian batsmen, as well as the bowlers, played to a certain plan and how pleasing it was to see all of India’s planned strategies realize into existence.

Needless to say, India has now settled into a set groove with the support staff as well and together they would look to conquer the world in all three formats. Starting with the World Test Championships, the Indian cricket collective will surely have the 2021 T20 World Cup at home, the 2022 T20 World Cup, and perhaps also the following 2023 ODI World Cup in sight. Wouldn’t be a surprise if this team, with these supporting heroes, could emulate the invincible Australia of the 2000s.