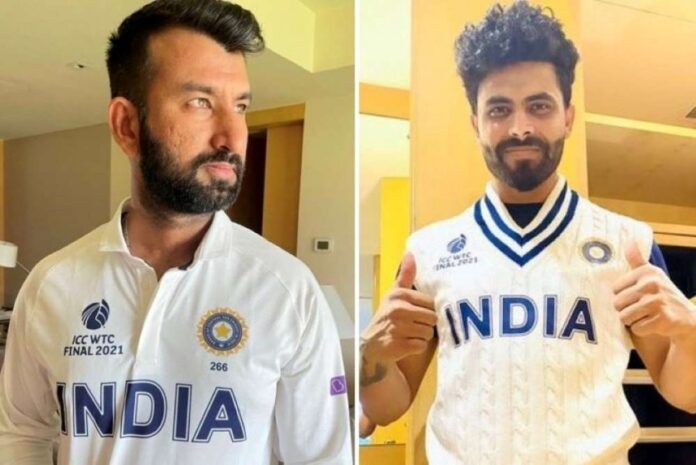 The Indian cricket teams, both men and women unveiled their jerseys for the upcoming tour of England on Sunday. While the men were seen in a retro-styled white with a shade of blue for the WTC Finals, the women honed India’s traditional jersey with the Byju’s ad for their one-off Test.

All-rounder Ravindra Jadeja shared a picture wearing the WTC Final jersey with the caption, “Rewind to 90’s #lovingit #india”. The World Test Championship is scheduled to begin on June 18 against New Zealand at Southampton. The game is regarded to be one of the most important Test matches ever.

With only a few days left for the Final, the Indian Cricket Team has begun their preparations for the same. The 23-member squad along with the support staff is currently in a strict 8-day hotel quarantine in Mumbai. However, the players are committed to working on their fitness and are often seen posting about their fitness regime on social media. The team is expected to fly to England on June 2nd after testing negative in 3 consecutive RT-PCR Tests.

Indian number 3 and arguably the most vital cog in the wheel, Cheteshwar Pujara also shared an Instagram story wearing the prestigious WTC Final blue. No less than a World Cup for the Test lovers, the unbreakable Pujara will ride the most Indian hopes on his shoulder against the Kiwis.

Women’s Team hon the whites for the first time in 7 years:

The Indian Women’s Cricket Team also received their Test jerseys on Sunday. Playing Test cricket for the first time since 2014, the Indian team will take on hosts England in a 4-day Test starting June 16 at the County Cricket Ground in Bristol.

Just like the men, the women’s team too, has been under quarantine before they fly off to England from Mumbai this week. This will also be Team India’s first series after the reassignment of Ramesh Powar as the coach of the national team.

To start off, India’s dynamic top-order batter Jemimah Rodrigues took to social-media to share how the jerseys were presented to each and every individual from the team by the two veterans – Jhulan Goswami and Mithali Raj, in an intimate but emotional ceremony.

Something that's very close to my heart. Do read if possible 🙂 pic.twitter.com/dPic3n82fy

After the one-off Test match, the eves are also slated to play a white ball series comprising of 3 ODIS and as many T20Is. The team, quite raring to get out on the field, will look to finish the entire tour with a wide smile on their as well as the fan’s faces.