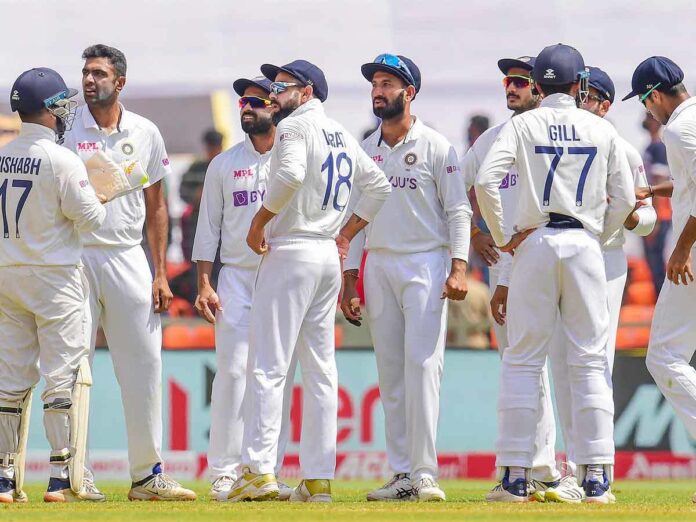 The Indian contingent in England enjoyed some time off the field and off bio-bubble fatigue last month but are back playing serious cricket. With the Test Series against England starting in just over a couple of days’ time, India will be looking forward to building a strong team. In pursuit of the same, the Indian team played a practice game in Durham recently. Here’s a look at how the Indian XI is shaping up for the First Test at Trent Bridge starting August 4th.

While Rohit Sharma walks in into one of the opening slots, it is the second that is likely to garner attention. The injury to Shubhman Gill allowed a chance for Mayank Agarwal to return to his original position. However, the recent form of KL Rahul, as also his previous records in England, could tilt the battle back in his favor at least for a start. In the limited practice that India’s had, Rahul is the one who’s looked more comfortable as well.

Opening partnerships are the most key to any visiting team in England. Not only for the runs that they score, but also for the number of balls they face – taking away the lacquer and the swing from the new ball. Leaving the ball is therefore slated to be one of the biggest challenges for Rohit Sharma and KL Rahul. Needless to say, an interesting battle awaits us cricket fans.

Indian middle-order on paper is one of the most powerful sides to watch. However, the batters have not quite replicated their reputation in the field of late. With bigger and better performances due, each of the four will be expected to deliver in England. Virat Kohli overcame his nemesis of 2014 in the last tour to England and is yet again in the country with a point to prove. Ajinkya Rahane as well has loved the traditional English conditions and will be keen on getting as many runs under his belt as possible.

And so as to the contrasting styles of Cheteshwar Pujara and Rishabh Pant, which worked wonders for India in Australia, India will look to continue with the same at least for the First Test. There have been talks about Pujara’s inability to accelerate but he did show a glimpse of aggression in the practice games played. The sticky nature of Pujara could also help negate the English swing early on, in case of an early wicket. Similarly, with Rishabh Pant at No.6, India could go on a full aggressive in the last few overs. The young wicket-keeper will like the ball coming onto the bat and one could witness him dancing down the track to the spinners and perhaps, also reversing the fast bowlers.

One of India’s main dilemmas would be the No.7 position going into the First Test. While the likes of Ravindra Jadeja and Shardul Thakur are tempting choices for the pivotal position, India might well look at Hanuma Vihari for the spot. Vihari with his compact technique and approach is the better batter of the three, more suited for the English weather.

Vihari in his limited offerings as a Test player has played varied roles for Team India right from opening the batting to being a stable middle-order batter to playing lower down with the tale. Importantly, he’s delivered each time of his asking – Melbourne Test being a recent example. The right-hander is also decent with the ball and could be a useful resource to give the front-line bowlers a break. On the other hand, Ravichandran Ashwin walks into the team without any explanation. One of India’s most successful spinners of all time, Ashwin did well for Surrey in the County game that he played. He has all the required weapons in his armor and has a mind of a technician, unparalleled.

India over the recent past has had multiple options with the ball. The likes of Mohammad Siraj, Shardul Thakur, and Umesh Yadav have impressed everyone with their pace and swing. Even in the practice game, Siraj and Yadav were amidst wickets bowling better than even Bumrah and company. The availability of options is a luxury to have for Team India, however, one still believes that they will walk in with three of their best bowlers – Ishant Sharma, Jasprit Bumrah, and Mohammad Shami (provided no injury concerns).

The trio has affected the most number of dismissals in between them in the last two years. They have shown their dominance across the SENA countries, troubling the batters at will. The variation, skill, technique, and more importantly, the longevity that these speedsters have shown in Test cricket is second to none. India will be banking on them to pick up as many wickets as possible. Bowling, for once, has not been India’s weakness and one would expect that to continue across the England series.