In a recent development, Cricket Australia announced the dates for India’s tour of Australia 2020-21. The news, coming after the declaration of India’s tour of South Africa, has stirred exccitement amongst the Indian fans. The hosts had already shown willingness and optimism for hosting India at home post their recovery from the pandemic. The island-nation has been successful at curbing the spread of COVID19 in the country and are evidently eager to resume cricket back to its full potential. 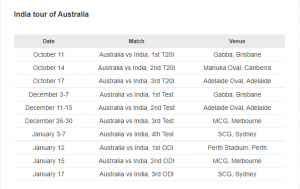 The elaborate schedule, both for men and women, announced on Thursday includes the prestigious 4-Test Border Gavaskar series. Either sides of Test cricket will see the teams get locked in limited over battles. The T20Is, that were to be played as a precursor to the T20 World Cup, could also see a shift if the multi-national tournament is put off.

“We know that circumstances beyond our control could mean that the final schedule potentially may look different. We will communicate any changes if or when they are required. We’ll continue to act in accordance with public health advice and government protocols to ensure the safety of the public, players and support staff.” said Cricket Australia CEO Kevin Roberts.

The Test match series, set to begin on December 3rd at Perth will mark India’s Border-Gavaskar trophy defense. India who have emerged champions in the last couple of iterations, will look to continue their dream run. The loss of No.1 Test ranking to Australia earlier this year will also remain at the back of their minds. The series is a great chance to level all equations and be back at the top for India.

“We are working closely with the BCCI to deliver the eagerly anticipated men’s and women’s tours. The Border-Gavaskar series is one of international sport’s great rivalries and this will no doubt be another enthralling chapter.”

Also sandwiched between the India-Australia series is Afghanistan’s 5th of all time but first ever Day-Night Test match. Australia will host Test cricket’s newest entrants in a one-off Test series at Perth. T20Is against West Indies in October and a week-long limited overs international series against New Zealand in January lie before and after India’s long schedule respectively. Moreover, Cricket Australia is also in talks with Zimbabwe Cricket for a limited over series down under sometime this season. Roberts explained a creation of CA’s biosecurity plan for these cricketing ventures. He also expressed gratitude towards the broadcasters and everyone else involved in designing of player safety and hygiene plans.

“Australia cricket will survive and thrive after the coronavirus pandemic dissipates, just as we have after world wars, depressions, recessions, and the many other challenges that have confronted us over the last 140 years.”

The resumption of cricket will boost the revenues for all the involved cricketing nations. It will also set an example for other countries to host international cricket in future. Till then, the fraternity only hopes that pandemic plays a spoilsport no longer.