The news of BCCI planning to play a Test and T20I series simultaneously has excited the Indian fans. It will be one of the first things to experience not only for Indian cricket but for the entire world. Playing two different opponents, in two different formats, with two completely different sets of players, at two different places, under two different conditions but on the same day might well also be a near-future for cricket overall.

BCCI in a recent statement was quoted saying that Indian cricket is looking at it as an option to revive itself from the financial crunch. Introduction of simultaneous series will mean wider reach, more revenue and in a way will also provide exposure to newer talents. It still remains to be seen how BCCI and Indian cricket approaches the idea. Having said that, here is how the two probable XIs might look like:

Indians have been at the top of their game in Tests and in the longest format, it is predicted that the World No.1 will play to their full potential. The only two players who might miss out on Tests could be Rohit Sharma and Jasprit Bumrah. Both have been a real asset to India’s test squad in the recent past. But their exploits have been more valued in the limited over matches. Moreover, the experience they will bring into the T20I squad will be of tremendous help for other youngsters to learn and grow. A few others who might well be in contention for a Test slot include Shubhman Gill and the Delhi speedster Navdeep Saini. If need be, India also have the luxury of routing Kuldeep Yadav into the side as the third spinner.

Overall, the core of the team’s batting hasn’t been disturbed and the pace battery too, is still as formidable. In the recent past, the success Ishant, Bumrah, Shami and Umesh have achieved, especially in foreign conditions is phenomenal. Their knack of picking up 20 wickets more often than not has transformed Indian pace attack to be a force in reckoning. The newly inducted Saini has also shown immense promise in domestic as well as the India A tours. The team, likely to take on Australia in India’s first Test tour post the pandemic, will look to garnish cricket’s new beginning with success down under.

The Indian team has failed to enter even the Top 3 of ICC T20 rankings for some time now. The team has been in a transition phase for the past year and half. They are yet to find a balance with the bat and have, at times, also been wayward with the ball. The Rohit Sharma-led team will therefore shoulder a lot of expectations. The Hitman has been known to nurture the young for the Mumbai Indians in the IPL and he will be keen on reciprocating the same at the highest level.

Shreyas Iyer and Manish Pandey too have been immensely consistent in the last couple of years and are able to carry the middle-order along. Hardik Pandya’s riches with the bat in the DY Patil T20 tournament could also allow the Indian team to play an extra all-rounder in Sundar or Krunal. The ODI specialist Shikhar Dhawan and the Nidahas hero, Dinesh Karthik could also be in with a big chance for an inclusion. Overall, the team though naive on paper can be overwhelming with the bat and possess the ability to surprise with the ball. 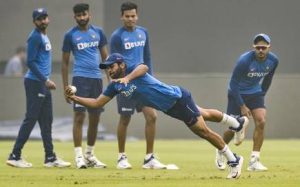 The IPL has made T20s a very accessible format for the younger generation. The number of talented individuals that the tournament has blessed Indian cricket with is immeasurable. Despite missing out on key players, Indians will enjoy the leisure of having a huge pool of in-form players. Suryakumar Yadav, Sanju Samson, K Gowtham, Ishan Kishan, P Krishna, Shardul Thakur, Rahul Chahar and the young sensation Riyan Parag have all been under the selection lens for a while now. It wouldn’t be a surprise to see any of them feature in the star-studded T20I XI.

Indians will also have an option to bring back the experience of Kedar Jadhav or Ambati Rayudu. While Rayudu has been unfortunate to miss out on a longer run, Kedar has proved himself through everything but age. Rather more interestingly, BCCI can also include MS Dhoni in the setup. Dhoni, who has been away from limelight and media interactions since the 2019 ODI World Cup is still believed to have a few more years left within. His guidance will help the young prosper more quickly and efficiently.

If the cricketing world will ever witness a double cricketing bonanza? Only time has answers. But till then, it gives us fans an opportunity to build our own fantasy XI across formats. Let us know your predicted simultaneous T20 and Test XI.