“The best way to be successful, is to be fearless” – Mithali Raj

With just over a month to go for the ICC Women’s World T20, let’s take a quick look at the Indian squad. 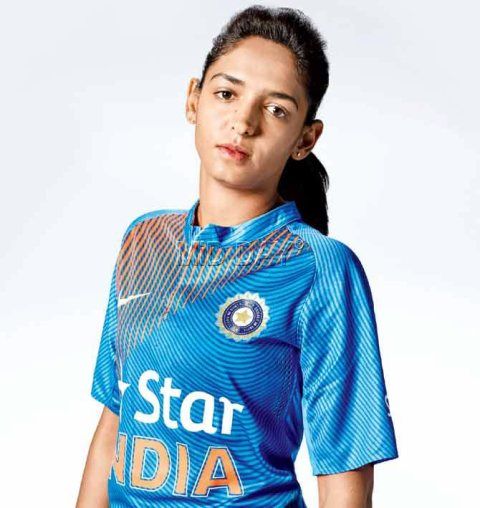 The captain of the Indian team is an aggressive bat in the middle order and a handy part time off spinner. Her leadership skills will be tested against the likes of Australia and New Zealand in the Group stage. Just like there is MS Dhoni for Virat Kohli, there is Mithali Raj for Harmanpreet Kaur. Harmanpreet is also the first Indian cricketer, male or female, to play for a foreign T20 league. Playing for Sydney Thunder in WBBL, she won the franchise’s Player of the Tournament award for her all-round show in the debut season. Post that she represented Surrey Stars in the second edition of ECB’s Women’s Cricket Super League. Carrying with her bounty of experience from India and abroad, a lot is expected from the Moga girl. 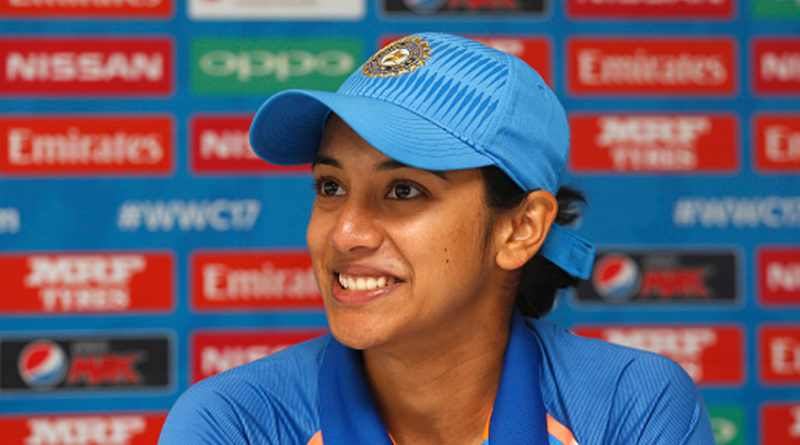 The stylish southpaw has quickly gained the reputation of being India’s one of the best openers. Her free flowing back lift and delightful stroke making are nothing less than a splendid spectacle. India will bank on Mandhana to give a solid start. At just 22 years of age, Smriti has matured as one of the finest cricketers. Just like her captain, the vice captain of the Indian team

featured in the WBBL playing for Brisbane Heat and Western Storms in the ECB’s Women’s Cricket Super League. 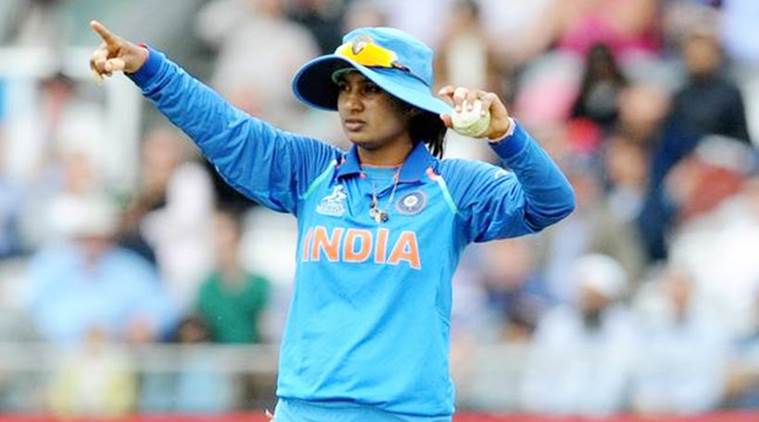 The senior-most player in the Indian outfit, Mithali Raj is the vital cog in the batting line-up. She is the highest run-getter in women’s ODI cricket and has a phenomenal career average of over 51. Having come so close to lifting the World Cup twice (2005 and 2017), it is expected that Raj will leave no stone unturned to grab the ICC Women’s World T20 this year. 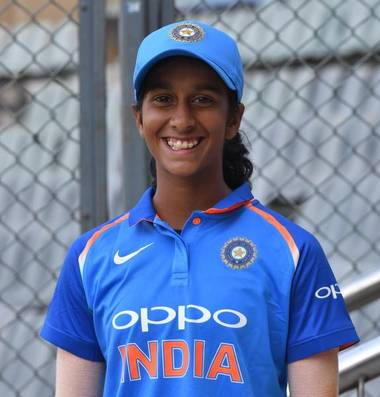 The 18-year old Mumbai girl has raised many eyebrows with her scintillating start to the international career. Fearless but at the same time a thoughtful cricketer, Jemimah is a rock solid batswoman. 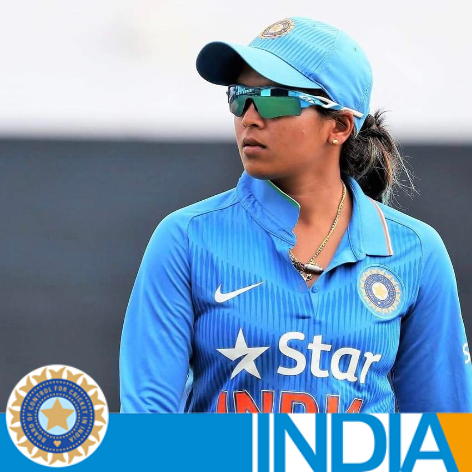 A lightning quick fielder and an aggressive middle order bat, Veda is unequivocally one of the best finishers in the Indian side. Coming from a land that has produced many great cricketers, Veda is a shining star of Karnataka. 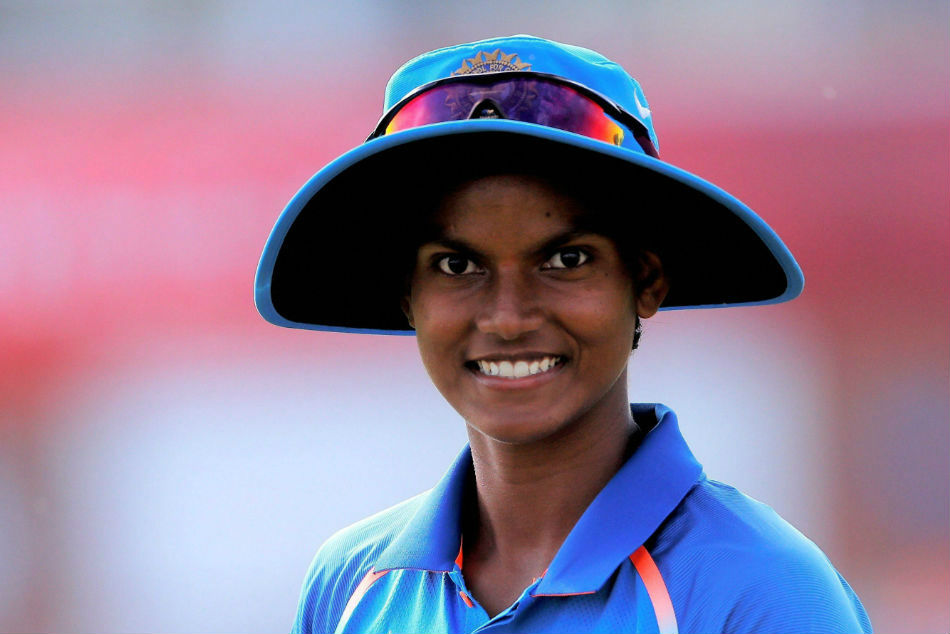 Technically sound and pleasing to watch defines Deepti Sharma. In addition to her batting brilliance, Deepti rolls her arm over to bowl part time off spin. 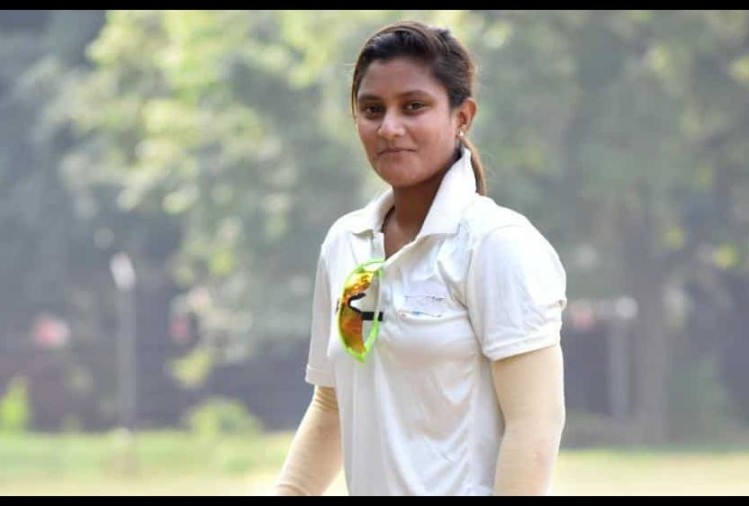 Wicket keeping is in her genes. Taniya Bhatia’s father Sanjay Bhatia was a part time keeper-batsman for Punjab in the late 1980s. She has inherited the wicket-keeping skills from her father and with her tremendous hard work she has scaled great heights. 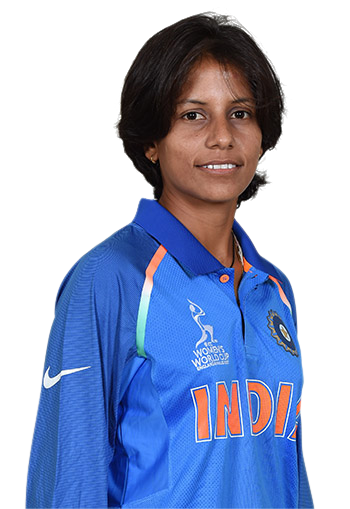 Poonam has been one of the spin bowlers in the Indian side. A gutsy cricketer, she flights the delivery to tempt the batter to have a go at her. She has the reputation of breaking partnerships and is the go-to bowler for her captain. 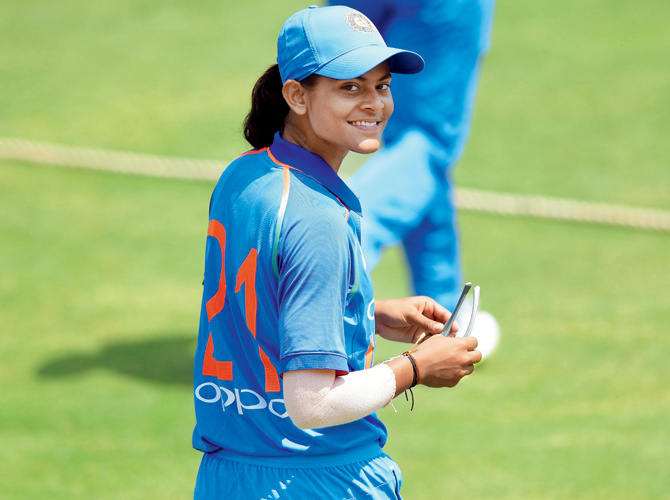 Replacing the relatively senior player Rajeshwari Gayakwad, Radha has come out all guns blazing from her domestic performances. A slow left arm orthodox bowler, Radha offers variety to the spinning department of India. 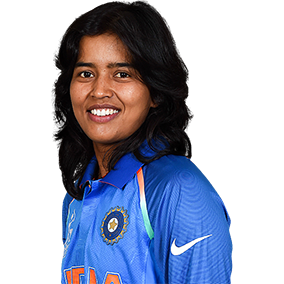 The 32-year old left arm orthodox bowler from Uttarakhand is a partner in crime with Poonam Yadav. The spin twins are more often than not wreckers-in-chief, and have bowled well in tandem to bail out their side from difficult situations. 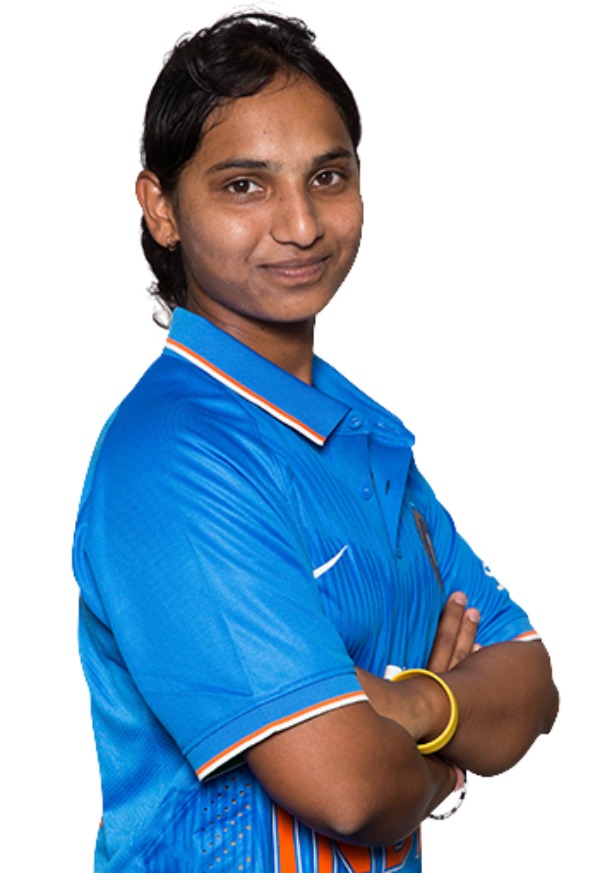 Hailing from Maharashtra, Anuja Patil, is known to be one of the best all-rouders in the side. Her jaw dropping cameos and more than handy off-spinners provides a perfect mix to the team dynamics. No ground in this world is too big for Anuja as she holds the capability to clear any boundary with ease. 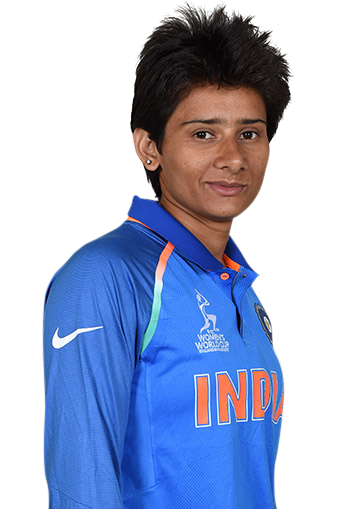 The Punjab express is a right arm medium fast bowler. When she is on song, she makes the batswomen dance to her tunes. Shouldering the pace bowling responsibility with Pooja Vastrakar, a lot will be expected from the two, in the absence of the experienced Jhulan Goswami. 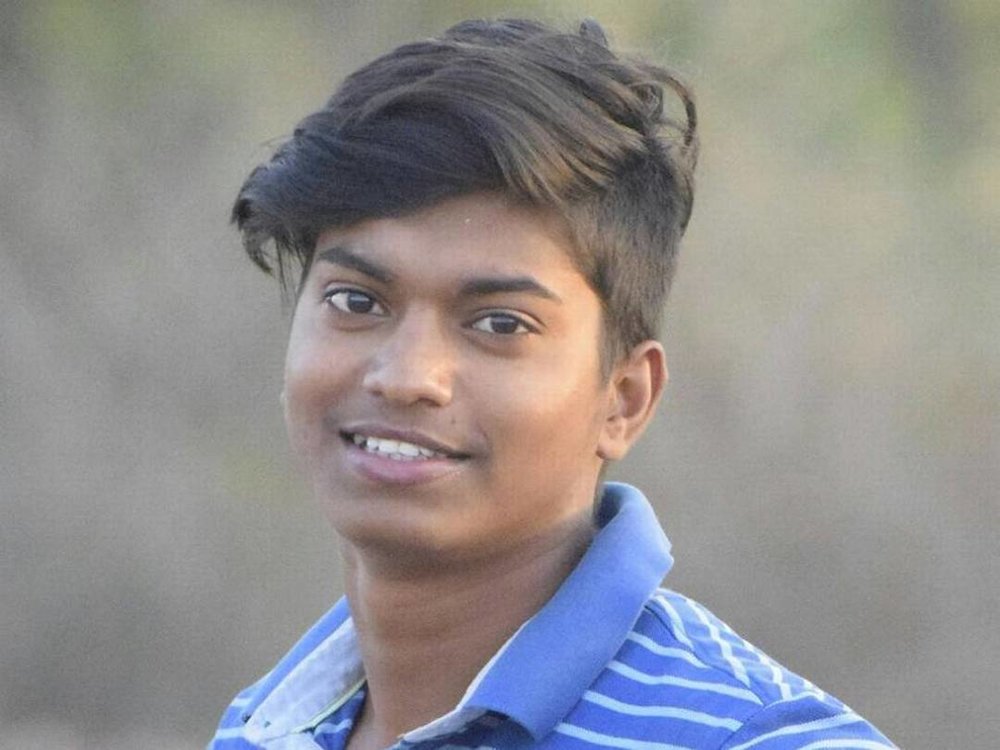 A right arm quick bowler and a right hand bat, Pooja Vastrakar, at just 19 years of age, made it big in the Indian cricket. She is the one player to watch out for who can win you the games with both, bat and ball. Holds the world record for the highest score by a No. 9 batter! 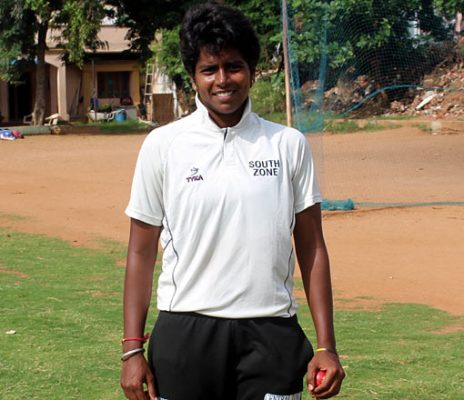 A right hand bat from Telangana, Arundhati has climbed up the ladder of success, thanks to her prolific domestic performances. With a good head over her shoulders, Reddy has a long way to go with the Indian team.­­ 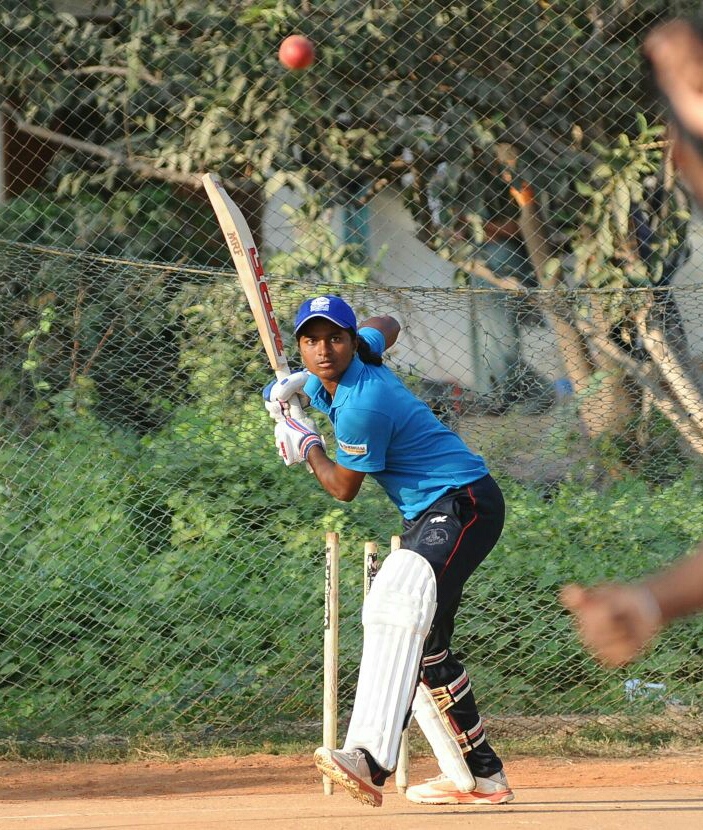 Dayalan is another all-rounder in the Indian squad, who can bat in the middle order and bowl right arm off-spin. The 24-year old from Tamil Nadu just gives the side an additional all-rounding cushion.