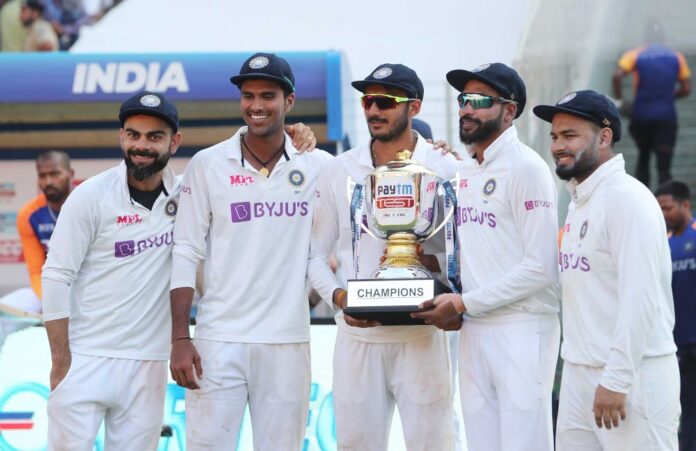 “Breakfast at Gabba, Lunch at Lords, and the Dinner at Centurion”, I haven’t come across a better summary of the year gone by. 2021 was about the Indian Team pulling out miracles, one after the other. Yes, the ICC Tournaments remained an untouched paradise, but Indian cricket scaled epic peaks on either side of it. To have scored wins in Australia, England, South Africa while continuing the dominance at home, in a single calendar year, is unfathomable. Ask the older generations about it happening and their thoughts would cease to exist.

A victory for the ages for @BCCI over @CricketAus at The Gabba. Magnificent resolve and tenacity from India's depleted team, a triumph that makes this one of the greatest wins of all time!
"When Actions Speak Louder Than Words" #AUSvIND @RishabhPant17 @imVkohli @RaviShastriOfc

2021 was about Virat Kohli and his team India and though the maestro himself was just about ordinary with the bat through it, he led the team to create an unprecedented history. Ironically it began with stand-in captain Ajinkya Rahane leading the side to a fightback against the Aussies. Down 1-0 after their worst-ever slump in Test cricket (36 all-out), India had salvaged some pride winning the Boxing Day Test of 2020 courtesy of Rahane’s heroics. However, the work had still to be done and the diminishing Indian squad depth did not help the cause much. Having said that, the maturity, the determination, and even more so, the audacity as the pundits would call it that this young Indian generation showed at first Sydney and then Brisbane was mesmerizing. Pujara and Pant templating Test cricket for the world, Vihari and Ashwin showing undying courage to salvage the draw at SCG, Gill-Sundar-Thakur-Natarajan all making their opportunities count, a 2-Test old Siraj spearheading the Indian bowling attack with a second-innings fifer at Brisbane and India breaching fortress Gabba after 33 years. The series win down under would arguably go down as the greatest Test cricket has ever seen.

The long Aussie summer subsided to an intense English rivalry back home. Albeit between a pandemic scare, the Indian team geared up to take on a spirited England for a couple of Tests at Chennai and Ahmedabad each, followed by an LOI series. A setback in the first Test at Chennai was difficult to digest, especially given how contrasting a surface Joe Root made it look. But if the last couple of years were to any indication of what was to come, India’s comeback to win three back-to-back Tests and thereby the series convincingly was not a surprise. Ashwin, the all-rounder was back amidst the fray with a crucial second-innings hundred in Chennai. However, it was Rohit Sharma who set the tone for the series with a counterattacking 161 in the second Test before the spinners took charge in the other two rattling the Englishmen to misery. The series also marked a dream debut for Axar Patel, who went on to have picked up as many as 36 wickets in just 5 Tests. The ODIs that followed the red-ball series were rather more competitive, either going into deciders. India won the T20I series 3-2 and the ODI series 2-1 with captain Virat Kohli, KL Rahul, and Shikhar Dhawan helming the headlight alongside debutants Suryakumar Yadav and Ishan Kishan. There was a flair about the Indian young setup that series, indicating its possible glory to come.

The most anticipated T20 League of the year, the IPL was the next one to follow. There were talks about how the tournament would be conducted given the Covid scenario but it did get underway well. However, things were soon to turn ugly and the spring of bubble breaches helmed it abandoned, or as it was told, postponed. Its resumption in the UAE later that year was rather much smoother and saw many upcoming Indians make their mark at the highest level. The likes of Ruturaj Gaikwad, Ishan Kishan, Suryakumar Yadav, Venkatesh Iyer, Devdutt Paddikal, and others caught many eyeballs throughout the two halves, a few also going on to debut for India the same year. 2021 was about the young brigade, the next generation, and the raw talent that India and the world possessed but in the IPL, the experienced Chennai Super Kings turned the tide around showing that age was a mere number. With the maestro MS Dhoni at the wheel, CSK cruised through to be crowned 4th-time Champions.

But IPL wasn’t the most exciting thing to have happened to Indian cricket that year. It was the time in England in between the two IPL halves that garnered the most attention. It began with a sorrowful defeat in the World Test Championship Finals at Lords to New Zealand but ended with India going into an unassailable lead against the hosts England. Perhaps one of the reasons that 2021 could be written in Gold in Indian cricket history.