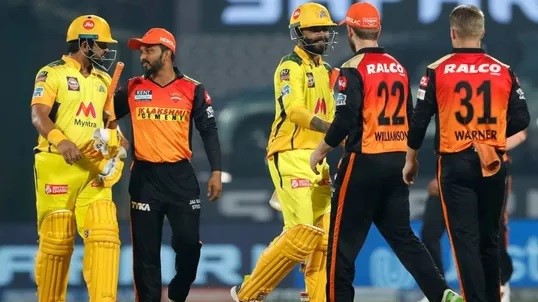 Chennai Super Kings have been absolutely magnificent resurging out of their first-game loss to Delhi at the start of the tournament. CSK got through Sunriseres Hyderabad on Wednesday in a convincing fashion chasing the 172 run-target in just 18.3 overs and with 7 wickets in hand. The win not only pushes CSK to the top of the table but also sends out a bold statement stating their form and stature this season.

The so-called ‘Dad’s Army’ was absolutely magnificent in the field. Together, they saved at least 15-20 runs and did not allow the likes of David Warner and Manish Pandey to get away with ease. They were indeed an example of how just better ground fielding and catching could lift up a team and its morale so highly. David Warner in his post-match interview also mentioned how Chennai fielders made scoring difficult for him and how it was due to it that Warner could not accelerate as he wanted to. Both Warner and Pandey scored a half-century in a rather quiet middle-overs phase. Though there was a lot of swing on offer in Delhi, the pitch did enough for the batsmen giving rich value for their shots. It was therefore expected that Sunrisers could up the ante in the second half and score a minimum of 180, a seemingly par-total on the Delhi wicket. Hyderabad’s resurgence came in with Williamson and Jadhav at the very end as they ended up 9 short of the par total, which in retrospect, wouldn’t have mattered given the CSK batting.

Ruturaj and Faf du Plessis, opening the batting for Chennai were watchful at the start but cut themselves loose once they settled in. Some ordinary bowling from Chennai also helped the cause, as du Plessis enjoyed driving through the off on multiple occasions in the powerplay. Ruturaj Gaikwad, much patient in the initial overs, also joined the party soon after as the duo continued smashing the Hyderabad bowlers to all parts. They also took their most important and perhaps the best bowler, Rashid Khan to the cleaners as well with him going for 36 of his four. Du Plessis got up his 50 of just 32 balls in the 11th over – his third consecutive 50+ score of the tournament. Ruturaj Gaikwad followed his South African partner to bring up his fifty as well and went on to pluck almost 25 of the next 8 before getting out to beauty from Rashid.

The damage though was already done. The 129 run opening stand had put CSK in a commanding position, needing only a run a ball 42 at that point. However, in the space of the next two overs, Hyderabad was successful in containing the run flow as Rashid dismissed both Du Plessis and Moeen Ali off consecutive deliveries bringing back a glimmer of hope to the fans. But with the kind of depth and experience in the Chennai batting lineup and with the relative inexperience post-Rashid Khan in the bowling department, Hyderabad was meant to be put down. The likes of Jadeja and Raina saw the team through to the finish and bagged those two crucial points to reclaim the top spot this season.

This wasn't just two more points for #CSK. It was a message to everyone else of their growing might in this year's #IPL.

Chennai Super Kings also have the highest NRR this season explaining the kind of commanding wins they’ve had throughout. The other heartening thing to see is that the team’s had 5 different players perform in the 5 games won. It emphasizes the match-winning ability and the balance in the squad. And dare I say, it is only about time that MS Dhoni also appends himself to the list – a moment the entire of India and the cricketing fraternity would be waiting for.

The team management, captain MS Dhoni and coach Stephen Fleming have all put trust and belief in their players for them to deliver every single time of asking. A champion-side like CSK, with a culture of trusting the senior players and motivating the junior ones have been one of the most successful teams in the history of IPL. Wouldn’t be a surprise to see them go the distance this time around.