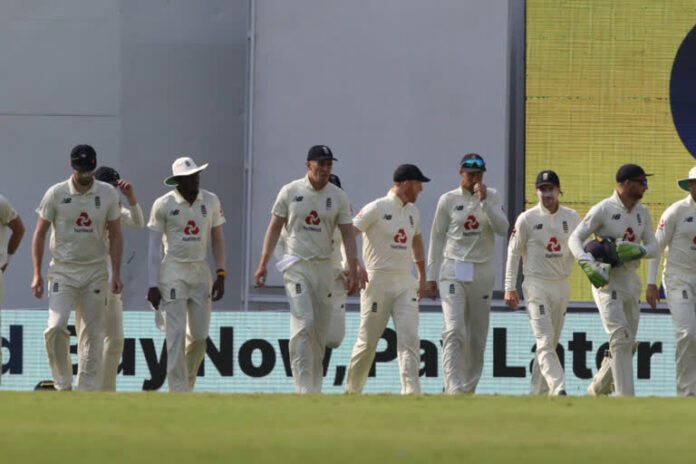 How often in the recent era have you seen teams bring in multiple changes after a crucial victory. The cricketing times are changing, and teams are sticking to a preset plan instead of continuing a winning combination. The England Cricket Team announced their 12-member squad on the eve of the Second Test against India at Chennai, starting Saturday. The visitors went in their most consistent formula of ‘inconsistency’, i.e. rotation of players in order to maintain the fitness and form of each and every asset in their team.

One change was forced but it is a sign of the times that a team produces a memorable win and makes four changes!#INDvsENG

England Cricket on Friday released their 12-member squad that included four changes – Ben Foakes, Stuart Broad, Moeen Ali, Olly Stone, and Chris Woakes replaced James Anderson, Jofra Archer, Dom Bess, and Jos Buttler. The rotation policy has worked for the English team throughout the last couple of years but a complete revamp of the bowling attack remains debatable. Dom Bess especially, having been the hero of the first innings with the ball would deem himself unfortunate to miss out. The off-spinner even trapped India’s best batsman Virat Kohli with a classical off-spinner but was highly indisciplined later, in the second innings leading to his omission.

The English team was hampered with the injury to their pace bowling spearhead, Jofra Archer forcing a mandatory change in Chris Woakes. The homebound Jos Buttler also forced the English side to bring in the relatively inexperienced Ben Foakes. Keeping in the subcontinental condition will be a real test for the Surrey wicket-keeper, especially on an expected rank-turner. All the other changes though come in as more of a strategy than anything else. Following a short tour to Sri Lanka and keeping in mind another month of international cricket at hand, the English set-up wants to allow enough rest opportunities to each and every player.

“I look at the talent around our squad and every single one of them can play a huge part in delivering something very special over the next couple of weeks. You have to be brave enough to trust those guys that they can win you the game. That is how we are going to grow and become a better team in the long run, with guys pushing for a place all the time.”

One good thing for England though is that one of their key statures on the field in all three departments, Ben Stokes has been recuperating well and is certain to make the playing XI on Saturday.

“Ben has actually pulled up really well. He’s obviously not played for a little while and he’s got a sore knee but he’s trained hard on Thursday and looks fitter and stronger for it. I think the more he plays, the more of the usual Ben Stokes you’ll see with the ball. He had such an impact with the bat, took an amazing catch at slip, and got the vital wicket of their main man Virat Kohli, so I can see him going from strength to strength.”

Talking about the complete revamp of the bowling attack, Root further mentioned, “I think, as a whole bowling group, it is important we consider everyone,” Root said when asked whether he would consider rotating the spinners as well as the seamers. “Everyone is human; nobody is a robot. It is important we consider guys who have played a huge amount of cricket and we try to make a good assessment of things going into the next game, whether that is to do with workloads, fitness, or where somebody is currently at form-wise. We try to make a good honest decision about what will be the best attack to take 20 wickets on the surface.

“Dom’s contributed extremely well over the last three games. But it’s great to see Moeen in such a good place with his game. He’s come on leaps and bounds and looks in a really good place, too. Stuart will play and we expect him to do exactly what he has done in the recent past in the England shirt.

“We talk about that rotation policy being crucial to our team’s performance so they’re fresh when they come in. But also making sure we’re getting the best out of the likes of Stuart, Jimmy, and the rest of our fast bowlers.

“Stuart has been extremely professional about things. All he’s tried to do is make sure he’s in the best possible place to start extremely well and he’s a great example for the rest of the guys. He’s not just gone about his own thing, he’s bought into the whole bowling group and he always adds a huge amount.

“It’s great to see him so excited about playing and you know he’ll be extremely determined to put in a good performance and really make this game count. If he’s got any sort of point to prove, he’ll want to be the main man and have a real impact.”

England will have no more than a few raised eyebrows to answer, but they seem confident of doing so. India on the other hand has all the tougher questions. An enthralling weekend and thereby five days of exciting Test cricket awaits!!