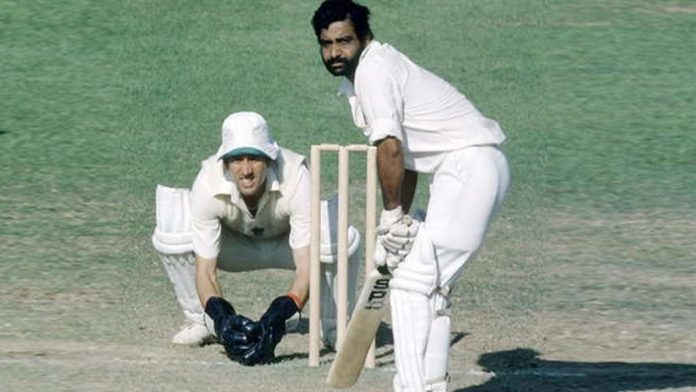 Batting was traditionally limited to sound defences but with time the batsmen have mastered the art of attacking the bowlers. And this very transition in Indian cricket began with a South Indian batsman attacking the tall West Indian bowlers with confidence. GR Viswanath or Vishy as he was fondly called, was fearless, aggressive and did not refrain from giving it back to the bowlers. His bat often made him walk the town-talk and it was his immense appetite for runs that distinguished him from the rest. Viswanath’s wizardry with the bat was unparalleled. Though not the strongest in the game, he had an impeccable sense of timing and a pinpoint accuracy with placements. He was an epitome of elegance behind square while his wristy shots on the leg brought a sense of calm to the spectators. Viswanath was fairly consistent and especially played an important role in kick starting India’s winning run overseas. The first of which came in 1976 against the West Indies. The hosts set India a seemingly impossible target of 403 in the last innings. Taking on the momentum upwards from Sunil Gavaskar’s hundred, Viswanath took the dangerous Windies bowling attack to the cleaners. His quickfire 112 set up the foundation and paved up the way for Amarnath and others to finish the run chase. It is one of the most inspiring fourth innings knocks the cricketing world ever witnessed.

GR Vishwanath was all class and elegance and played cricket like it was meant to be. With his heart in the right place.

Interestingly, Viswanath had his own equations with debuts. Playing for Karnataka on his Ranji debut, the maestro scored a double ton. Little did he know that he’d score a hundred again on his international debut for India against Australia at Kanpur two years later. Viswanath was out on duck in the first innings but made a dream comeback scoring a ton in the second. Vishy’s batting was also a lucky charm for the Indians. Not only did they manage to draw that test at Kanpur, but remained unbeaten whenever Gundappa scored a century. In fact, India went on to win each of the next 13 times he scored a hundred.

Viswanath at his ecstatic best: More than any of his 14 centuries though, the cricketing world remembers his 97-run knock against the touring West Indies in 1974-75. Battling the scorching heat, Viswanath played the unfathomable pace and bounce of the West Indies bowlers with a certain supremacy. He valued the good and lashed onto the bad deliveries, but more importantly played through time. His 97* in the first innings, especially his responsible batting with the tail reprieved India out of early trouble. He also hung in there for long in the second innings before India triumphed with a 100-run victory. Viswanath’s heroic batting display is included in Wisden’s Top 100 and is also referred to as the second best non-century in Test cricket history.

Two of Viswanath’s other significant performances came late in his career. Facing the fierce Australian bowlers led by Denis Lillee, he delivered a power-punch scoring 114 in Melbourne. Two years later, on a similar turf at home against England, the Indian number 4 scored 222 at Chennai. It remained his best score in Test cricket. Viswanath believed in his technique more than anyone else. He was well versed at assessing and tackling the situations. Moreover, he ensured that he took the entire team along, allowing his partners ample time to settle in.  In a career spanned over 13 years, Viswanath represented India in 91 Tests and 25 ODIs. He also had a brief taste of captaincy in India’s England tour of 1979-80.

An inspiration to many Viswanath was often compared to Sunil Gavaskar, but remained a silent feature. Living through the same era, Viswanath’s flamboyance, grit and match-winning abilities drew obvious parallels with the Little Master. However, neither of them took the comparisons too seriously. Rather, it was their inseparable friendship that did wonders for the country on field. They were the ambassadors of cricket back home and inspired an entire generation of batsmen in India.

“I have seen situations when we all struggled against the opposition. But then Vishy would score off the good deliveries. He had four-five strokes to the good balls that were bowled to him. Vishy is shorter than me, but he was the taller batsman.”

The likes of Dravid, Ganguly, Tendulkar, Sehwag have all been vocal about the kind of influence Vishy had on their batting. The Karnataka batsmen provided a perfect example of how to convert a defence into attack. He had the patience to wait, the skill to score and importantly the courage to take risks when needed. His art of attacking the bowlers laid a perfect foundation for generations to follow. Today, the aura Indian batsmen have been successful to create, the terror that they’ve managed to instill in the opposition and the prowess that they’ve built can all safely find its roots in Gundappa Viswanath’s batting. He truly was one of the firsts to popularize aggressive batting in Indian cricket. Wonder if his temperament and hard hitting abilities would have done more wonders had he been playing in the current era.