The England Cricket Team drubbed India to a thumping loss in the First Test at Chennai. Shouldered by captain Joe Root’s incredible double century and an all-round English bowling attack, England beat India by a margin of 337 runs. Against the run of all expectations and in yet another 5th-day thriller, England became only the second team, since 2013, after Australia in 2016 to beat India in their home conditions. They were clinical and confident in their approach and applied themselves to set plans with great maturity and dedication in the entire Test match.

You could argue the toss made a big difference but that won't be completely fair. You still need to bat time and score enough to take advantage of that and England won the game with the partnerships Root had with Sibley and Stokes.

The wide-gap in the First Innings:

On a flat-as-a-road wicket early on, toss certainly played a key role. There was only a little on offer for the pacers and virtually nothing for the three Indian finger spinners. India still managed to get a couple of wickets before Lunch on ay 1 but gave all the momentum away to the visitors in due course of the day forward. Joe Root and Dom Sibley stitched a mighty partnership, to be broken only in the last over of the day. However, Root with the support of Stokes resurrected the England innings once again on Day 2 and went on to score his fifth double century, his second in space of 3 matches. A few missed opportunities and let-gone half-chances cost India dearly with hosts posting mammoth 578 run-total on the board.

It was only leveled down to be a catch-up game for India from thereon. The Indians tried hard but succumbed to the discipline of English bowling. The middle-order crumbled yet again while Pujara emerged as the lone warrior. While, Rohit, Gill, Kohli, and Rahane all got out cheaply, Pujara found an able aid in the keeper-batsman Rishabh Pant. The two, playing in two completely contrasting approaches, got the Indian innings going with a 119-run stand at almost run-a-ball. Pant scored a blistering 91 off 88 while Pujara completed another patient fifty, 73(143). Once both of them departed, it was all but over. Newly into his cricketing career, Washington Sundar played well with, first Ashwin and then the tail, to remain unbeaten on 85*, but with India still 241 runs behind.

The need to recreate the Australia brilliance:

England then came into bat having refused the follow-on and played with an ambiguous approach all along. They played till late into the day without a seemingly materialistic plan. They were bowled down for 178 courtesy of Ashwin’s 28th 5-wicket haul. India needed 420 runs to win but more importantly, had only a little more than 100 overs to survive.

The Indians showed incredible grit, patience, and strength to tackle similar situations and win the series down under, especially in absence of most of their key players. However, other than the Melbourne Test, Indians struggled to be consistent throughout the series. The fact that miracles were produced one player after the other, immortalized the Sydney and the Gabba Test. But not always can one expect the same. The loss at Chennai can be disintegrated into parts, where even fortune and toss take a fair share, but Indian failure with the bat, with the ball, and even in the field cannot be looked upon.

India’s final nail in the coffin: A loss to contemplate 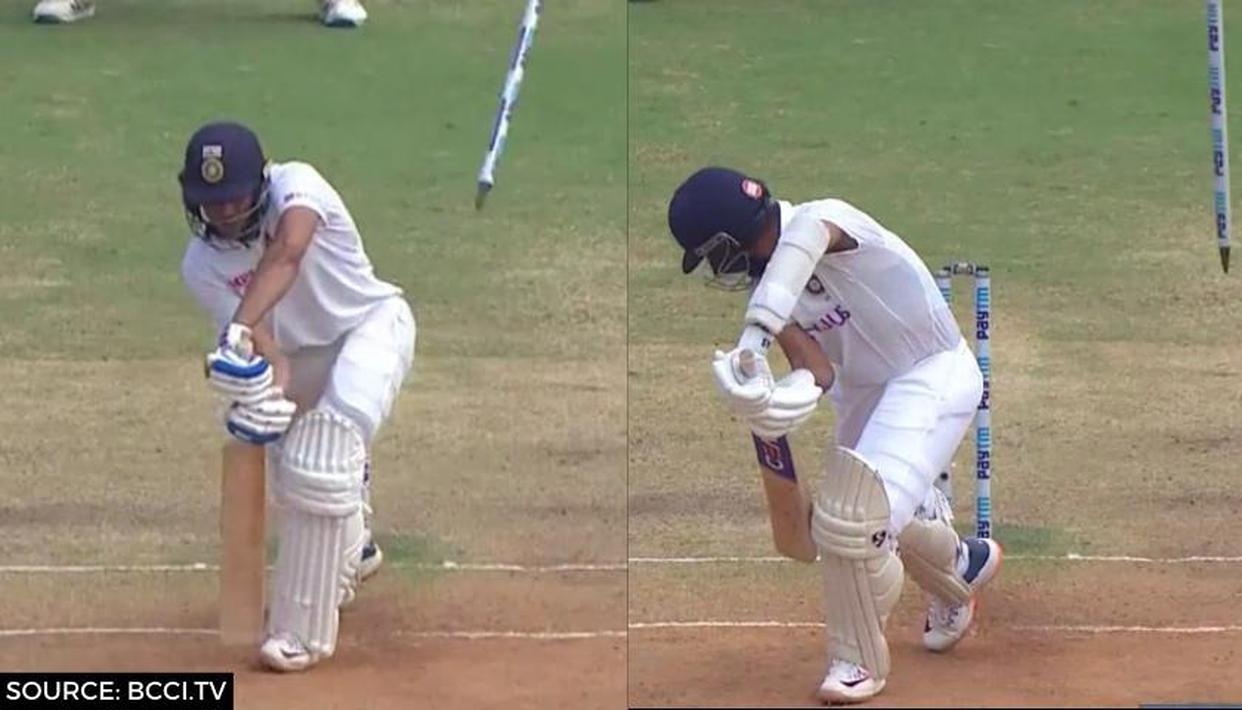 Impact of Anderson’s reverse swing, ft. Gill and RahaneIn the second innings, on a Day 5 wicket, the spinners had started to get the drift, turn, and bounce. The reverse-swing almost non-existent in the first two days of the Test too had started symbolling its existence. The Indians began the day steadily but soon lost Pujara to a ball turning away from Jack Leach. Gill and Kohli were still at the crease and so were the Indian hopes of seeing the day through. However, the introduction of Anderson towards the end of the first hour of play completely pivoted the match in England’s favor. The world’s best fast bowler exploited the reverse swing very well and got rid of Gill, Rahane, and Pant in a single spell. The Indians were completely exposed and a hefty loss was only about time to be imposed.

There is a reason Jimmy Anderson is one of the best we have seen. In his first over we saw three reasons……

Despite Kohli’s one-sided fightback, the English pocketed the game by a whopping 227 run margin. But more importantly, they showed the world the way to tackle India and the Indian conditions. Much like how Australia did in their 2016 tour to India in the First Test at Pune, England outplayed the hosts by some margin. A number of loopholes, a number of voids, and a number of errors were exposed laid bare in open. But as Indians managed to complete a 2-1 series win against Australia then, would they recreate the same against England? Well, only time has answers. In fact, 2-1 is also the minimum margin India needs to qualify for the WTC finals. Needless to say, an enthralling month of cricketing action awaits!!