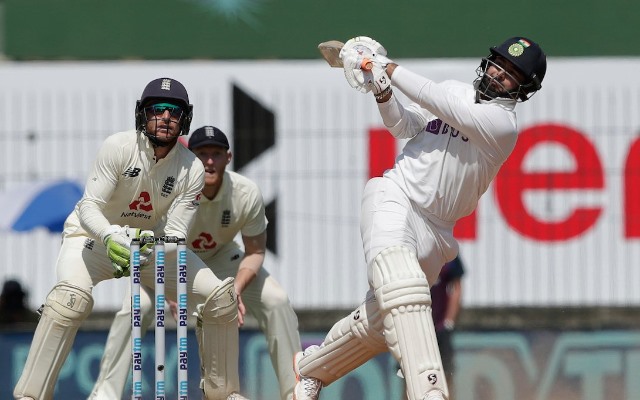 Cricket is changing and so is the approach of the players towards the game. Does it make the current generation more irresponsible towards cricket? Certainly not. Everyone’s got their own identity and own perspective on the game. Be it Test, ODIs, or even T20s, what is important is to know the gravity of the situation and apply yourself to it accordingly. What we all saw in the first innings today, at Chennai was an example of the same. Rishabh Pant in his most natural way of batting blistered himself to 91 of 88 balls, in an innings that included 9 fours and 5 massive sixes.

It is easy to associate Pant with such flourishing innings across formats. However, this one caught the eye given the situation he walked into. At 71/4, it was expected that Pant would take time to settle and only then shift gears as he did in the series down under. But the instincts and impulses seeing the left-arm spinner being introduced into the attack got Pant going. He first hit Jack Leach for 2 consecutive maximums over Long On, and later continued the onslaught scoring in excess of 10s per over. Pant was in no time batting at 52*, having completed his 9th Test match fifty and perhaps, his most attacking of them all.

The knock unsettled the English bowling lineup. Though the buffer, courtesy of a mountain of runs that England had piled on, kept them on the front foot, it restricted the bowlers to bowl to a fixed plan. Despite most fielders on the boundary, Pant backed his ability to clear the fielders and pulled off all the risks that he took. On the other hand, he also released the pressure from Pujara’s shoulders. After Kohli and Rahane’s dismissal in quick succession, Pujara had slid back into his defensive shell with a task to get the Indian innings back on track. He did not look uncomfortable but the runs had started to look hard to come by until Pant arrived. The impact of Pant’s bravery on one end allowed Pujara to free his arms. He, as well, bounced down the track a few times and drove brilliantly through the off as well as the on side. Pujara also reached his half-century due process, his fourth in the last five innings.

The high and lows of Pant, he will change a game on its head but in doing so will miss out on the odd personal milestone. Need players like that in your lineup. That's a good days entertainment. #INDvENG #cricket

Pujara departed in the first half-hour after Tea in the unluckiest fashion. His pull shot against Dom Bess deflected off the ducking Ollie Pope at short leg, to lobby onto Burns at mid-wicket. A contrasting but entertaining and much needed 119-run partnership between Pujara and Rishabh Pant was broken. Watching the two Indians, in their own element, going by their own unique way yet again emphasized the beauty of 5-day cricket. The fall of wicket though did not hamper Pant’s approach to the game. He continued to back his instincts and scored all around the ground against all bowlers. He stepped down the track yet again, on 91*, and looked to go inside out over Long off, only to mistime it to extra covers. Jack Leach completing a good catch was only a fitting end to Pant’s innings.

It was the third time in his career that Pant was dismissed playing a lofted shot in the 90s. Did he over-do his aggression in the knock? Should he have waited and played as an anchor, especially after Pujara’s dismissal? Well, the galore of questions is natural but one cannot ignore the fact that Pant was in complete control of what he was doing and played each and every ball with the same intent and confidence. He did the same in that match-winning knock in Australia as well. Lived by the sword and died by it!!