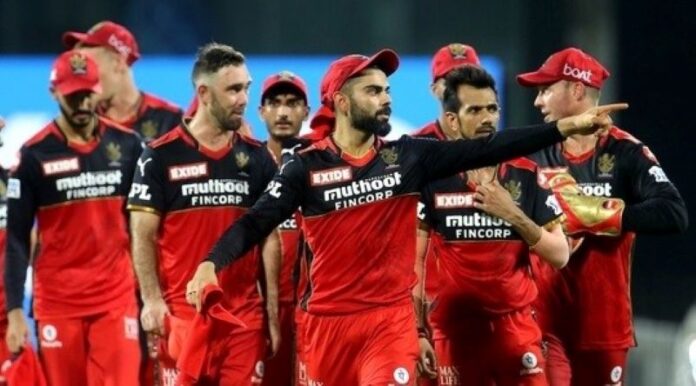 The IPL 2021 has had the most unexpected start ever, with the Royal Challengers Bangalore winning their first three games for the first time in the last 14 years. What is even more enthralling is that the Virat Kohli-led team has gone one better with a win against Rajasthan Royals today in Mumbai. For what’s worth the win for RCB, fourth in as many games, was more convincing than any other, even while the team feels they are still quite far from their best cricket. While one agrees that this is too early to predict or even conceptualize a winning team, but the question that doesn’t fail from popping up – Is this the Royal Challengers Bangalore year after all?

It was pretty much about AB de Villiers and Glenn Maxwell in the first three games. The firepower that they brought into the middle order, and especially the kind of acceleration they had even through the middle overs has been pleasing to watch. Both of them have played a few miraculous innings in the first 4 games, and look unstoppable at the moment. They have kept the situation under control, be it setting up a target or chasing one, and ensured that Bangalore always ended on the right side of their expectations. More importantly, the inclusion of Maxwell this season has given RCB the required freedom even beyond ABD and Kohli. The mighty Australian himself has been vocal about the kind of role he’s asked to pay in the franchise and how comfortable he is doing the same. The change in mindset that’s come post the revamp of the RCB support staff, headed by Mike Hesson and Simon Katich can’t be overlooked either. Each player has been given a specific purpose in the team, and all the strategies have been well thought off, unlike yesteryears.

This is a serious show of strength from @RCBTweets . And this innings from Kohli is the icing on the cake

Against Rajasthan Royals too, the team was phenomenal, possibly also covering up the sole loophole that one could’ve found – the opening combination. Virat Kohli and Devdutt Paddikal at the top had an extremely good outing, attaining the 178 run target all by themselves with almost 3 overs to spare. Interestingly, Virat Kohli was seen taking a backseat in the partnership as the young left-hander took the Royals’ bowling attack to all parts of the ground. Paddikal in fact, went one to bring a maiden IPL hundred, only the 3rd by an uncapped Indian ever. The exuberance, elegance, and finesse with which Devdutt Paddikal went through his process were unparalleled. He played extra-ordinarily through both, off and the on the side, and looked at utmost ease hitting past and over the bowler. Paddikal’s valiant hundred, also allowed a relatively quiet Virat Kohli to get going and bring up yet another half-century in the IPL. Kohli also became the first-ever to 6000 IPL runs the due course of his knock of 72*.

However, the only reason RCB has managed to attain this winning streak and the only reason why their batters have played so freely is their bowling attack. The coming back to the rhythm of Mohd. Siraj post the Australian tour, the contributions from the new recruits Jamieson and Harshal, and the experience and control of Chahal and Sundar have helped the team close out key moments of the game, more often than not. The existence of a fixed game plan when it comes to bowling is fairly evident. Harshal Patel has talked about how he has been given the role of bowling at the death. Similarly, Siraj has been backed by the management to bowl upfront with the new ball, and the speedster has delivered. Kohli’s trust, belief, and persistence with both of them despite an occasional bad over have paid him rich dividends.

What it has also allowed the team is to use the likes of Kyle Jamieson, Yuzu Chahal, Washington Sundar, and others as per the need of the situation. It is often said that a team looks threatening when they have a vacant position even after attaining a strong balance. In the case of the Royal Challengers Bangalore, as it stands, they seem to have two. The rotation between young Rajat Patidar, Shahbaz Ahmed, Daniel Christian, and Kane Richardson has so far worked well, Shahbaz evening winning them a game with a 3-wicket over against Hyderabad.

That has been the beauty of the RCB lineup so far in the tournament. They have found ways to win in all given scenarios and are at least a few steps ahead of everyone else in the tournament. The top position on the points table, as it stands, is well-deserved and the team will only hope to take the momentum forward. It is imperative for the law of averages to strike the team with a loss, but it is highly important how the team comes back and doesn’t panic. For all we know, RCB is already one of the favorites to lift the title this year.