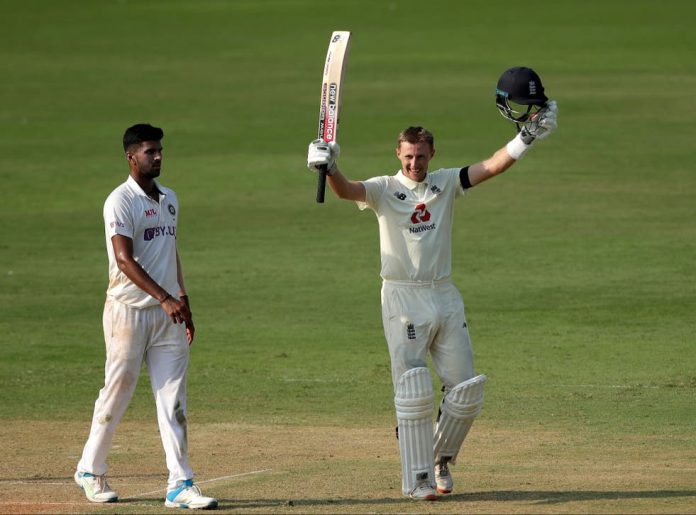 England captain, Joe Root playing in his 100th Test match notched up a well-compiled century against India on the first day of the Chennai Test. He was on the money right from the word go playing shots all around the ground. On a wicket, that offered only a little for the bowlers, Root was sumptuous with his timings and cautious with his risks, especially with his sweep shots and cuts behind square. Translating his imperious batting performance from Sri Lanka, Root seemed at extreme ease continuing his impeccable form. He negated all of India’s ploys well, did not let the Indians take control, and more importantly, kept the flow of runs ticking over. Though it only marked the first day of the four-match Test series, Root, after his 426 runs effort in the two Tests against Sri Lanka last month, puts himself well in contention of being compared with the greatest visiting batsmen in the sub-continent of all times.

A century in a 100th test for @root66. He has been magnificent. Love how he has targetted bowlers.

The likes of Alastair Cook, Kevin Pietersen, Michael Vaughan, and others have all cherished beautiful memories during their visit to the Indian sub-continent. Moreover, their ability to play longer innings, play the anchor role as also attack when needed has often put the home nations on the backfoot. Joe Root’s dominance in these recent months has been no different. His innings of 128* at Chennai on Day 1 of the tour is also certain to give the entire team confidence. He stitched a 200 run stand with opener Dom Sibley, helping England finish with 263/3 at stumps.

However, it would be of utmost importance to continue the batting tomorrow, making it as difficult for India as possible. England’s last tour to India in 2016-17 saw the visitors lose a couple of matches by an innings despite scoring in excess of 400 in the first innings. But given the nature of the Chennai wicket and its reputation to deteriorate after the first half of the Test, a score in excess of 500 might as well eliminate the possibility of an outright loss moving forward. It would also give the bowlers some time and buffer to bowl at adding pressure on India’s in-form batting order.

Having said, Root’s knock at a crucial juncture in the game cannot be miscredited. The right-hander and perhaps the most neglected of the Fab-4 off late proved his worth yet again. With a lot at stake even with the World Test Championship in the picture, Root set up, not only this match but the entire series to follow. After all, yet another Englishman found his comfort-home in the sub-continent.