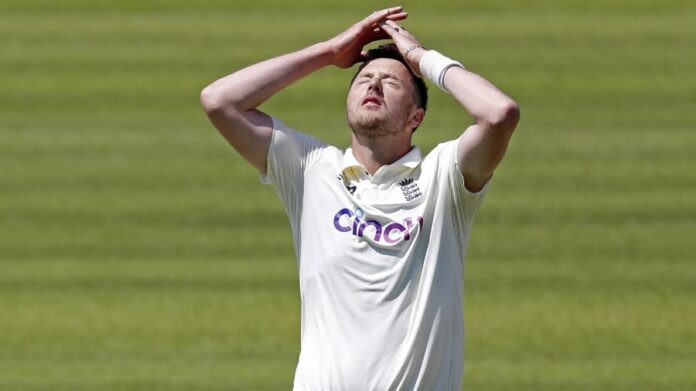 England and Sussex bowler Ollie Robinson has been suspended from all international cricket following his pending outcome of the disciplinary investigation of his tweets from 2012 and 2013.

Robinson will not be available for the Second Test against New Zealand starting next week at Edgbaston. He’ll also leave the England camp to return to play for his county. Following his debut, Robinson’s tweets from 8-9 years ago had surfaced on Wednesday. The fast bowler said that he was “embarrassed” and “ashamed” as he apologized “unreservedly” for the post.

After play on Wednesday, Robinson said: “On the biggest day of my career so far, I am embarrassed by the racist and sexist tweets that I posted over eight years ago, which have today become public. I want to make it clear that I’m not racist and I’m not sexist.

“I deeply regret my actions, and I am ashamed of making such remarks. I would like to unreservedly apologize to anyone I have offended, my teammates and the game as a whole in what has been a day of action and awareness in combatting discrimination from our sport.”

Incidentally, the England team on Wednesday had also taken to the field against the malpractices followed across the sport. Players, from both teams, stood on the side of the field before the start of the first Test, in a ‘moment of unity.’ The home players also wore T-shirts that denounced various forms of discrimination.

Robinson was also the pick of the England seamers in the first Test picking up 7 wickets in the two innings. He was also resourceful with the bat down the order alongside Burns getting England out of the follow-on threat early. Though his absence is unlikely to affect England’s bowling attack, courtesy of their plethora of options but will play a huge role in shaping young Robinson as a cricketer moving forward.

Talking about him in the post-match conference, the English captain Joe Root said, “From a performance point of view, on the field, he’s had an exceptional debut. With regards to the stuff that has happened off the field, it’s not acceptable within our game – we all know that.

“He has dealt with a huge array of emotions over this last week and he has got to learn some hard lessons. He addressed the dressing room, and media outlets, straight away, he fronted up to it. He showed a lot of remorse from that point onwards.

“For us as a sport, we’ve got to keep looking to be better, educate and learn as much as we can and make the game as inclusive and diverse as possible. This team is committed to doing that and hopefully, over time we can make a real difference.

“We’ve got to move forward from this, we’ve got to learn from it and do everything we can to make sure it doesn’t happen again.”