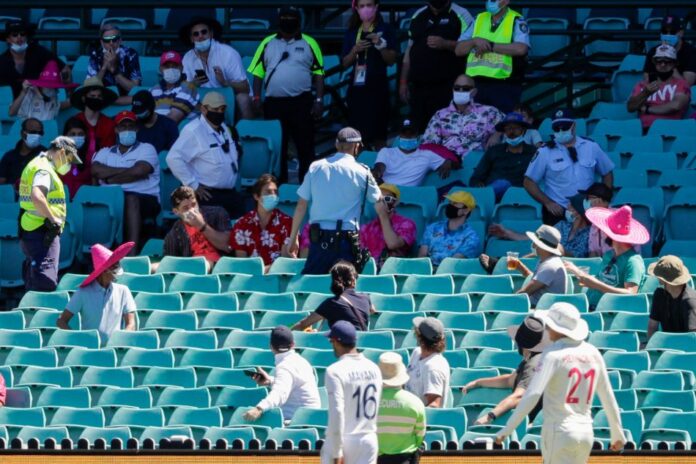 Six Australian spectators were evicted from the stadium on Day 4 of the Third Test between India and Australia at Sydney following a complaint from the Indian team about the racial abuse. The said six people were also warned after India’s official complaint at the end of play on Day 3.

Mohammad Siraj, the Indian speedster fielding on Fine Leg fence in the second session of Day 4 brought it to the notice of captain Rahane as well as the on-field umpires when the spectators did not divulge from passing racist comments from the stands. The two umpires Paul Wilson and Paul Reifel then halted the game to ensure that the spectators were escorted away from their seats with the help of the New South Wales’ local police. The ICC has launched an investigation on the matter, as have New South Wales Police, while Cricket Australia issued a statement to say it has launched an inquiry of its own.

“The abuse of cricketers by crowd members is not acceptable,” Sean Carroll, Cricket Australia’s head of integrity and security, said. “We thank the Indian team for their vigilance in reporting today’s incident, which we are now in the process of investigating.

“A number of spectators were interviewed by NSW Police and subsequently removed from the SCG on Sunday afternoon. While we await the outcome of the investigation by NSW Police, CA has launched its own inquiry into the matter.

“It is most regrettable that an otherwise excellent Test match contested in tremendous spirit by two friendly rivals has been tarnished by the actions of a small number of spectators over the past two days.

“As hosts, we once again apologize to the Indian team.”

"Racial abuse is one of my greatest pet hates, sad to see it in Australia"

Watch Australia’s head coach #JustinLanger speak about the #racism incident at SCG, #TimPaine’s chat with the Indian team and #NathanLyon’s role on the final day of the SCG Test.#AUSvIND #Siraj #Bumrah pic.twitter.com/un2rvwne1Z

Initially, after Siraj and Bumrah, the two Indian speedsters complained against the crowd on Saturday, Caroll had said: “If you engage in racist abuse, you are not welcome in Australian cricket. We’re All In To Kick It Out Kick It Out and Sky have launched a partnership to end racism in sport.

“Once those responsible are identified, CA will take the strongest measures possible under our Anti-Harassment Code, including lengthy bans, further sanctions and referral to New South Wales Police.”

The same was reiterated by Kerrie Mather, Venues New South Wales’ chief executive, who said: “At the SCG, we pride ourselves on welcoming anyone and everyone in a safe and inclusive environment.

“We are taking this extremely seriously. If those involved are identified, they will be banned from the SCG and all Venues NSW properties under our Act.”

Australian coach Justin Langer, Indian spinner Ravi Ashwin too strongly condemned the act and emphasized its eradication from the sport. Even Indian captain Virat Kohli tweeted also reminding the previous occasions when the SCG crowd had used foul and obscene language against the players.

Racial abuse is absolutely unacceptable. Having gone through many incidents of really pathetic things said on the boundary Iines, this is the absolute peak of rowdy behaviour. It's sad to see this happen on the field.

Meanwhile, the Indian team at 98/2 will face a stern test of playing out 90 overs on the final day. It will also be interesting to see if the team goes for an outright win over a draw, chasing in excess of 300 on the last day. Injuries to Pant and Jadeja, the inefficiency of the tail, and an out-of-form Hanuma Vihari might also add to the worries and pressure on the pair at the crease. Both Rahane and Pujara are bound to play at least the first session and a half for India to stand some chance of getting through. With Australia and Australian bowlers in complete command, a turnover from here would be India’s most miraculous Test performance ever.