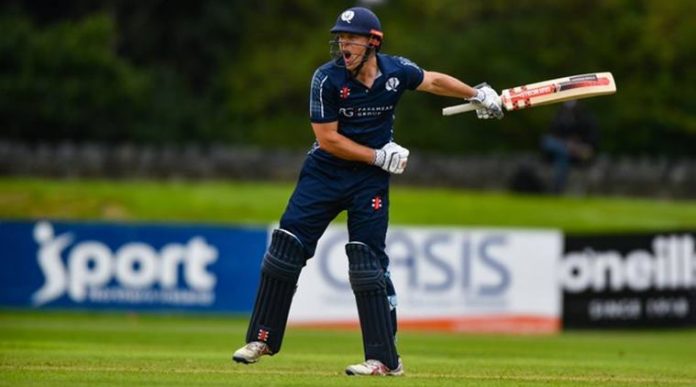 Scotland explosive left-handed batsman George Munsey hit the 3rd fastest century during the 2nd match of the Tri-series against the Netherlands played at Malahide, Dublin on Monday.
Netherlands captain Peter Seelar won the toss and decided to field first. Munsey and Kyle Coetzer gave a flying start scoring 72 runs in the 1st 6 overs. Coetzer reached his 50 fifty off 24 balls while Munsey completed 50 off 27 balls. Both Scotland openers put the Netherlands bowlers under immense pressure. After reaching his fifty, Munsey raced away and reached his century off 41 balls. Coetzer and Munsey put on 200 runs for the opening wicket. Munsey remained not out on 127 off 56 balls with 5 fours and 14 massive sixes with a strike rate of 226.78. Scotland posted a massive total of 252 for 3 in 20 overs.

In reply, the Netherlands started off poorly losing 3 wickets for just 18 runs. Captain Peter Seelar steadied the innings and completed his 50 off 32 balls. Despite his unbeaten knock of 96, Netherlands could only score 194 for 7. Scotland won the match by 58 runs.

Munsey was awarded the man of the match award for his brilliant knock. He recorded the sixth-highest induvial score by a batsman in the T20I format. Aaron Finch 172 against Zimbabwe on 3rd July 2018 at Harare Sports Club, Harare. His previous best score in T20I was 156 against England on 29th August 2013 at Southampton. Hazaratullah Zazai 162 against Ireland in 2019 February, Glenn Maxwell 145* against Sri Lanka at Palleke on 6th September 2016.