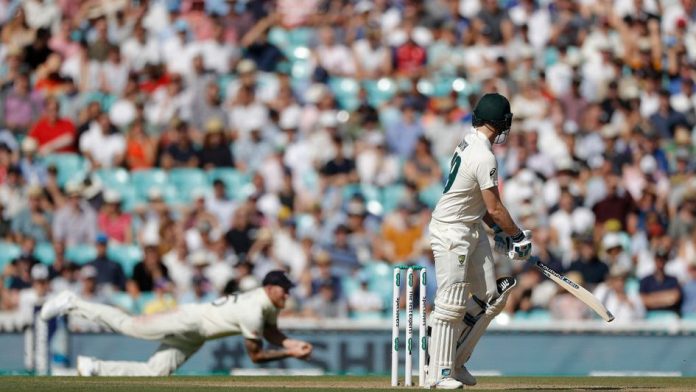 England defeated Australia by 135 runs to level the series on the 4th day of 5th Test match played at Kennington Oval, London on Sunday.
Starting on the overnight score of 313 for 8, England were bowled out for 326 with Archer being dismissed by Pat Cummins while Nathan Lyon took the wicket of Leach. The hosts set the target of 399 runs to win.

Marcus Harris and David Warner struggled against the England bowlers. Stuart Broad got the breakthrough dismissing Australian openers cheaply again. Marnus Labuschagne and Steve Smith continued their brilliant form before Jack Leach dismissed Labuschagne with a superb stumping by Jonny Bairstow. Steve Smith continued to bat well in the 1st session and Matthew Wade looked positive with his intent. Australia went into lunch break at 68 for 3.
England got off to a perfect start in the 2nd session as Stuart Broad got the big wicket of Steve Smith for 23. Matthew Wade and Mitchell Marsh tried to steady the Australian innings adding 63 runs for the 5th wicket. Captain Joe Root made breakthrough dismissing Mitchell Marsh for 24. Wade continued to play with positive intent and reached his fifty off 67 balls. Australia ended the 2nd session at 167 for 5.

Jack Leach got the wickets of Nathan Lyon and Josh Hazlewood in successive deliveries to bowl out Australia for 263. It was the 1st time that an Ashes series was drawn since 1972.