In a game of inches, MS Dhoni has acres at his disposal!

However, this day last year, Mahendra Singh Dhoni, scrambling back for a second, with the ball just inside the 30-yard circle, fell short by a few of inches. That’s also how close India were from making it to the finals of the 2019 ODI Cricket World Cup.

What if Martin Guptill’s throw missed the stumps or what if the throw had ricocheted off Dhoni’s bat for a boundary in the 2019 World Cup Semifinal?

Raingods allowed only 46 overs to be bowled on June 9,2019, leaving the last four of the Kiwi innings and the other 50 of the Indian innings for the consequent reserved day. Resuming the at 211/4, post Williamson and Taylor’s steady half centuries, James Neesham powered New Zealand to a modest 239. However, thanks to the intermittent rains, overcast conditions and strong breeze, the 240-run target looked like a mammoth 350. All the dryness and ease that Kohli intended before choosing to bowl first the other day, had died down. If India had to qualify for the coveted final, they had to battle the swing and keep up with pressure.

Domino-fall of the Indian Wickets: 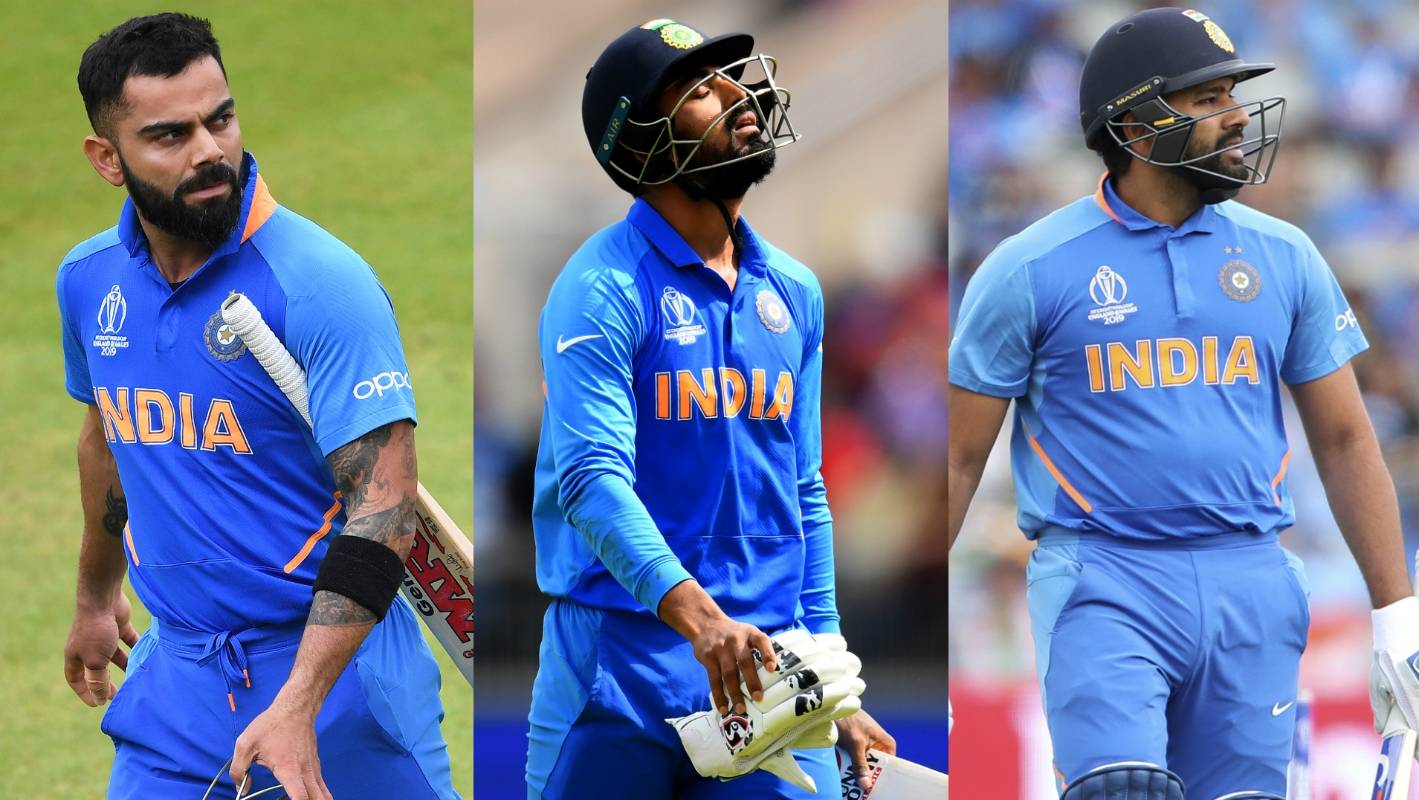 Unfortunately enough, the Indians managed neither. On that day, Rohit Sharma, Virat Kohli, KL Rahul departed in quick succession to Henry and Boult, leaving India’s underexplored middle order exposed early. Dinesh Karthik, promoted up the order, managed to survive for time but failed to trouble the scorers much, as India were reduced to 24/4. Rishabh Pant and Hardik Pandya at the crease then tried to build a rebellion but their tasks were cut short by the spin of Mitchell Santner, India 92/6. The ghosts of 2015 World Cup semi-final and the ICC Champions Trophy 2017 final resurrected in memory of many fans from around the globe at that moment.

“It was a game of margins and MS was run-out. 45 minutes of bad cricket puts you out of the tournament. Difficult to take it – but New Zealand deserve it “– Virat Kohli

Indian team had once again faltered in the knockouts. Being in command and control throughout the entire tournament, the Indians were battling for survival. They held in, but held in only just. It all rested on the shoulders of MS Dhoni and Ravindra Jadeja to construct this miracle. 1.2 billion people back home hoped that the pair would manage to seek through, much like they quite often did in the past.

A glimpse of hope:

Dhoni has always been known for playing to the situation better than anyone else and in the build-up to the World Cup, Jadeja had gained some momentum with the bat. While the former played the anchor role that day, Jadeja played his shots at will with some confidence. It almost seemed as if the left-hander had carried a different surface with him to bat on. The aggression, control and stability at the crease from the pair was evident helping the fans, both in the stadium and in front of TV screens, discover their lost hope. The 117 run-stand had also put the Kiwis on the backfoot, making their bowlers and the fielders feel pressure. India were in the driving seat even with 32 needed of the last 14. An explosive, thrilling and a heartening finish was up for grabs but Jadeja’s loft off Boult was held by Williamson at long-on and the anti-climax began. Bhuvaneshwar Kumar joined MS in the middle with a sole responsibility of giving the strike back to the expert if the need arises. Dhoni began Ferguson’s penultimate over with a six over mid-wicket. He pulled the speedster effectively off the back foot through the vacant leg region. Comparatively quiet till then, Dhoni had got over his nemesis and seemed in readiness to do his mundane of finishing the innings. However, immediately next ball, looking for a second, Dhoni fell short of the crease courtesy Guptill’s swift pick-up and direct hit.

Yet another World Cup Heartbreak

The run-out ended India’s winning hopes and the innings was set to end just the way it started, with a pinfall of wickets. For the first time in 15 years, the cricketing fraternity had seen MS leave the ground in tears. The heart of a cricket fan, sunk in the grief of the inevitable loss drowned even more seeing the legend leave the ground in tears. Till date, MS Dhoni has not returned to the cricketing field. The ‘Finisher’ known for finishing the match with a six, finished his innings, six-odd inches short of his target.

As Virat Kohli walked towards him on the dressing room balcony after the heart-breaking  loss, M S Dhoni slowly extended his hand for a shake. A wince from the captain, and a nod from the former skipper. Then, Kohli shook Ravindra Jadeja’s hand and ruffled the hair of the day’s hero. No words spoken again. Behind them, Patrick Farhat, the longtime physio of the Indian team, had broken down. Coaches Ravi Shastri and Bharat Arun stood glum. No words spoken.

It was India’s third consecutive loss in the final stages of an ICC tournament. An obvious emotional outrage from fans wishing that the batsmen had played well in those first 45 minutes followed. However, with time, everyone was up appreciating the efforts of the cricketers in the World Cup till then. India has been through such upsets in the past – 1996 WC Semis. 2003 World Cup Finals – but this loss topped all the rest.